Jack Ma is an erhu player and composer from Shanghai

When I searched on Google for Jack Ma I got this: 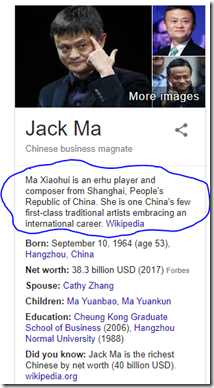 Ma Xiaohui is an erhu player and composer from Shanghai, People's Republic of China. She is one China's few first-class traditional artists embracing an international career. Wikipedia

Not being ripped off (for once)

Hooray.  Expansys Hong Kong are selling the LG G Pad 8.3 Google Play Edition for the equivalent of $225.  This is a great price for a tablet that was being sold on Google Play (in US) for $349, and it's the same price as in the US.

Googe Play Hong Kong still has Nexus devices at much higher than US prices, with no sign that this policy will change.  Whereas Apple charge the same (high) price in Hong Kong as in the US

I sometimes get WhatsApp message that have been sent to hundreds of different Hong Kong phone numbers.  It appears that these are sent so that when they get a response they know that the phone number is active.  Cue even more annoying junk sales calls.

I did a Google search but I can’t find any information about this.

So does anyone know whether the sender already has the confirmation (that the number is active) when the message is shown as delivered?  Does it matter whether you exit the group (which definitely sends a confirmation message)?

Why doesn’t WhatsApp allow me to simply ignore the group?  Or is there a way to do this that I can’t figure out?

The BBC recently upgraded its website.  This is "upgraded" in the sense of making it flashier and brighter and generally less useful.

It also has adverts, which I suppose we can't complain about because the funding comes from people in the UK who pay for a TV licence (i.e. almost everyone), and those of us in the rest of the world are freeloaders.

Another annoyance is that there is lots of video (on the sports pages at least), which is not available to non-UK residents.  The puzzling part about this is that firstly they ask you to choose a UK or international version, and they also check your IP address, so why not just hide the content you can't watch?

It's the design that really annoys me.  More on the sports page than for news, presumably because they are trying to provide coverage for several different sports, and in the summer there are various major events (Euro 2008, Wimbledon, Tour de France, Open Golf, and of course the Olympics).  Unfortunately it all gets so cluttered, and I can never find the information I want.

You can see an archived copy of the old version here.

Rather than wait for the BBC, Danny Baker has started his own podcast (it's also available through iTunes).  And, unlike the current BBC podcasts, it does includes some music, albeit a rather eccentric selection.

So far he's only done one of them , but says that he hopes to do it on a daily basis before too long, and seems to imply that he may give up his daily show on BBC (Radio) London.  He started his radio career there back in the late 80s (when BBC Radio London was called GLR), and always seems to to return there after his spells elsewhere (Radio 5, Radio 1, Virgin, TalkSport - see Wikipedia).

If I were cynical I might say that he has built his career on being able to take the same material and recycle it endlessly on different stations with slightly different audiences.  So doing a podcast sounds like an inevitable career move.  Or maybe it's just a way to prompt the BBC into doing a podcast of his existing show.

Danny Baker is probably something of an acquired taste - he is loud and brash, and indeed the first time I heard him on the radio I quickly switched over to something else - but I did eventually change my mind.  If you can get through the first 5 minutes then you should be OK - he is a natural broadcaster with a phenomenal knowledge of trivia, so it's worth persevering.

For the first podcast, his "sidekick" is David Kuo, who apparently lived in Hong Kong during his childhood - and so one of his anecdotes revolved around his family's maid bringing home a live chicken from the wet market.  Needless to say, Baker found almost every element of that tale rather bizarre.  Well, I suppose he would.  I'd rather have fewer sidekicks and more Danny Baker, but maybe that's just me.

The BBC say that Podcasts are not as popular as the hype might make you believe.  That may well be true, and it certainly wouldn't be the first Internet phenomenon to suffer that fate, but I am a big fan - up to a point.

The BBC has embarked on a fairly ambitious Podcast trial, and so far it is free and it's available outside the UK (unlike their experiment with making TV programmes available on the web).  The trial includes programmes from all of the BBC's national stations, but with more emphasis on talk (because there are copyright issues with music).

I don't think I ever listened to Start The Week when I lived in the UK (in part, I suppose, because it is broadcast at 9 a.m. on Monday), but now I am able to download it and listen to it on my way to work, and jolly good it is too (in a Radio 4 sort of way).  Melvyn Bragg, who I think used to present Start the Week, now does In Our Time, in which he and his guests "investigate the history of ideas", and if that sounds a bit too much like a bunch of dusty academics showing off, then I'm afraid that is often what it turns into - though it can be interesting.

I'm sure I have heard Mark Kermode on the radio before, but I'm not exactly sure where.  Anyway, his film reviews (from Simon Mayo's Radio 5 show) are available as a Podcast, and whilst I can't say I totally share his tastes in films, he is an entertaining and intelligent critic.  There is also a daily podcast of other features from Simon Mayo's show.

I have to admit to being a fan of Chris Evans (from the days before he was rich and famous), and if you can get over the fact that is on Radio 2 (previously the dullest of all the BBC's radio stations), his podcast is also quite good fun.

Newspaper podcasts are much more variable.  The Guardian have quite a few, including Football Weekly, which is generally good, though there are definitely times when it is just a bit too laid back.  The Times also has several podcasts, but I found Danny Kelly's football one far too hyped-up and stopped listening after about 5 minutes.

I have to say that although I did try for using an ordinary MP3 player, I finally caved in and got an iPod, which makes it all a lot easier - though not quite as seamless as Apple might have you believe.

I periodically get emails from people who are amused to find that if you type "miserable failure" into Google, the first result is a link to the White House.  And they say satire is dead...

Well, now Google have put a stop to this little game, as they explain here.

Can't argue with the logic of this.  After all, Google's job is to provide the most accurate search results, not provide amusement for people with too much time on their hands.

Well, I'm back, but Internet access is still painfully slow. The BBC website has a "low graphics" option that helps considerably, but many other sites are very slow (or not available at all).  I know the BBC has a big advantage because it doesn't carry advertising, but many web pages could be designed better to load faster even with the ads - but they can't be bothered because most people have fast Internet access, or so they suppose.

Those chumps over at OFTA are suggesting that we need to be patient for another few weeks:

While telecommunications operators are now making arrangements to obtain as much capacity for data traffic as possible to the North America via Europe, Singapore, Australia and China, which will help to improve the data traffic including access to overseas web sites, the public are advised to minimise non-essential visits to overseas web sites, uploading or downloading large files to/from these web sites, and other non-essential activities which demand large bandwidth over international connections.

Overseas callers calling Hong Kong are advised to use mobile phones or fixed-line phones instead of calling cards. But for callers from Taiwan and Japan, calling card services for calls to Hong Kong are normal.

So we still have to pay the normal fee for Broadband access, but we are being asked to reduce "non-essential" usage. Well, since 99% of most home Internet access is "non-essential", that should solve the problem, shouldn't it?  I just look forward to a rebate from PCCW (I'd settle for 50%). Isn't that what OFTA should be working on?  Don't they review the contingency plan that ISPs have in place for when something like this happens?

The problem, of course, is that we have all got used to the Internet "just being there", and assume that geographical distance is no longer important (most Hong Kong blogs are hosted in the States or the UK, and normally no-one would even notice).  Until now, of course.

It's a minor inconvenience not to be able to read a blog, but a big problem for companies that rely upon systems that are accessed over the Internet.  I suppose that most large companies do have some arrangements in place, but smaller companies probably don't, and some will have learned an expensive lesson.  Mind you, problems getting on to the Internet are a perfect excuse for delaying payments to suppliers (and even paying salaries) - and at the Year End as well, so maybe it's not all bad.

I came across this truly terrible website from Page One.  Then I read this (from the BBC) about websites being user-friendly (or not):

Independent research shows that as many as 83% of internet users leave a website because they can't find what they are looking for," said Trenton Moss, director at Webcredible.

That would be me, then.  Whoever designed Page One's website has totally lost sight of what users want, and instead has tried to be far too clever.  If there is any useful information on this website (like, for example, addresses and opening hours of their bookshops) I certainly can't find it.

The lesson here is that if you really insist on using Flash, you should also offer a simple (i.e. HTML) version of the site.  That way, people might just be able to use the site rather than cursing and then giving up.

On a similar subject, I am getting very annoyed with Amazon.  They seem to have "enhanced" their service by adding third-party vendors, but it's only after you've added the item to your basket and tried to check-out that they tell you that "there seems to be a problem" - namely that this vendor doesn't deliver to Hong Kong.  But Amazon, you know that I live in Hong Kong, so why even bother to show me anything from this vendor, let alone allow me to add their merchandise to my shopping basket?

IceHeat is a new discussion forum from someone who says they are bored waiting for IceRed to return.