The Observatory are listing typhoon Muifa on their website.  I had a quick look, and it seems that a Hong Kong minibus driver is in charge of this one.  It's path is erratic (to say the least).  It was heading in the general direction of Hong Kong and then turned right round and is apparently not coming anywhere near here! 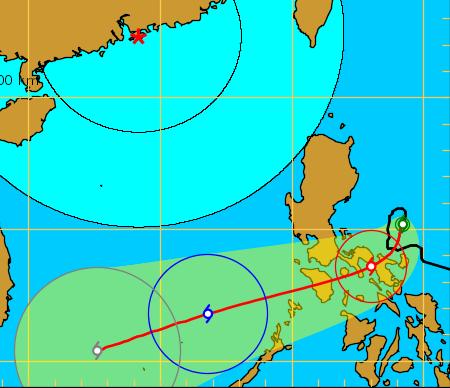 The Guardian reports that well-educated Japanese women are desperate to meet and marry British men.  Admittedly this intelligence comes from an agency which has a financial interest in arranging such matches, but even so I feel sure that it must be true.

According to Destina Japan, professional women in Japan are increasingly looking overseas for romance because they feel Japanese men do not understand their need to work.  [..] "Japanese women like the fact that British men have a modern attitude to family life as well as a respect for the traditional aspects of the Japanese culture."

British men - best in the world.  I must remind my wife just how lucky she is!

You've probably noticed this advert in the newspaper:

At first sight the headline suggests it's for an investment plan, but if you read the text you discover that it's about avoiding paying tax.

Their point is that if you are a British national you may be liable to inheritance tax, unless you can prove you are domiciled overseas.  They claim that "long-term expatriates can apply for non-domiciled status".  I am not an expert on tax, but I think this is misleading.  Domicile is a matter of fact, based on your circumstances.  You don't need to apply for it!

If the British Inland Revenue chase you for tax you can declare that you are domiciled overseas, and they may check that this is true and ask for proof, but otherwise it's exceedingly simple.  For a few years after I moved to Hong Kong they sent me an annual tax return, I duly filled it in saying that I was domiciled overseas, and that was the end of the matter.  Now they don't bother anymore.  There may be a few special cases where your country of domicile may be a matter of dispute, but for most people it's no problem at all.  Which might explain why this company has a 100% success rate helping clients apply for non-domiciled status.

Regardless of all of that, the headline is obviously untrue.  Their point is that your estate might be subject to 40% tax.  Well, maybe, but that's a one-off payment.  Not 40% per annum.  Weasels.

However, you have to give them credit for grabbing my attention.  If I ever want some help in doing something that I could perfectly easily do myself, I certainly know who to call.

There is a Hong Kong urban legend that some people with the family name of Tsim have this mis-transcribed as Jim in official records maintained by the British adminstration. Hence their ID cards show what looks like an English name.

I am not sure how much truth there is in this story. I know there are people in Hong Kong who have this name, but how many, and was it really a mistake by a stupid Brit?

As a rule, I try to avoid mentioning so-called news stories that are actually just press releases, but this one struck a bit of a chord with me. I suppose it's fairly obvious that names go in and out of fashion, but when a friend of mine pointed out several years ago that you could probably guess someone's age from their name I was quite impressed with this insight. But then, as we know, I am quite a shallow person.

Now it seems that there is company trying to make some money out of this concept. The Guardian and The Scotsman both seem to have had a slow news day and decided that this press release was worth printing. Virtually unaltered, by the look of it, though two journalists have put their names to the stories!!

The Monica system is used to identify consumers. It takes five-year age bands and calculates the chances of the person's age being in each band. Unless an organisation specifically collects information on customers' ages, it is very difficult to target people according to age.

Needless to say, these "rules" don't apply in Hong Kong. In fact, it is quite common to come across people here with first names that it's hard to believe that anyone under 70 would have in the UK. For example, my grandmother's first name seems to be very popular here, for some reason, but it certainly doesn't feature in the top 100 names from the UK (or the top 300, either, I'd bet).

Out of interest, in the UK one hundred years ago, the top 5 names for baby girls were:

I'd say that Mary is a classic name that doesn't sound particularly dated, but the other four certainly sound quite old-fashioned. That doesn't stop them from being adopted by Hong Kong people, but that must be better than the outbreak of Ellies, Chloes, Sophies and Megans that you will currently find in the UK, or the totally eccentric first names (such as "York", to take a topical example) that some people here choose. There's nothing wrong with good old-fashioned names.

The list is stolen from The Sun, itemising the so-called "50 worst decisions ever" dreamed up for a Sky TV show on this subject presented by, er, Angus Deayton. The comments are mine.

1. Jeweller Gerald Ratner committing commercial suicide by saying a decanter and glasses he sold for ￡4.99 were “total crap.”
Agreed. Not a clever thing to say.

2. Civil servant Jo Moore sending a cynical e-mail saying the World Trade Center terrorist attacks made September 11 a good day to bury bad news. She later lost her job.
A mistake, but why is this at no. 2?

3. Prince Edward involving his dysfunctional family in It’s A Royal Knockout.
I reckon the rot set in when they did that 'Royal Family' documentary several years earlier.

4. The decision to build the white elephant known as the Millennium Dome.
Agreed. Why do governments do stuff like that?

5. Coca Cola marketing Dasani “as pure as bottled water gets” in the UK. It was simply treated mains water from Sidcup.
Well, marketing people do this all the time. As we know, similar products are very successful in the USA and Hong Kong

7. Hoover’s “free flights” promotion which ended up costing them ￡48million.
Yes. It turned into a PR disaster and Hoover ended up being taken over.

9. Cherie Blair involving conman Peter Foster in buying a flat for her son Euan.
Sounds like a lot of fuss about nothing.

10. David Beckham texting obscene messages to assistant Rebecca Loos.
Well, it doesn't seem to have done him much harm.

This is a rather strange story from France that doesn't seem to have been mentioned in the SCMP.

Police in Paris have discovered a fully equipped cinema-cum-restaurant in a large and previously uncharted cavern underneath the capital's chic 16th arrondissement. Officers admit they are at a loss to know who built or used one of Paris's most intriguing recent discoveries. "We have no idea whatsoever," a police spokesman said.

The next day, The Guardian had some answers:

There are, at most, 15 of them. Their ages range from 19 to 42, their professions from nurse to window dresser, mason to film director. And in a cave beneath the streets of Paris, they built a subterranean cinema whose discovery this week sent the city's police into a frenzy.

Building a fully functioning subterranean cinema was, the LMDP admits, a more than usually stiff challenge. The project took some 18 months to complete, though most of the hard work - including shifting a large pile of rubble off the terraces, and shoring up a couple of walls - was done in three or four weekends.

With their long experience of such matters, the group's technicians had little difficulty piping in electricity and phone lines.

"The biggest hassle was that everything - tables, chairs, bar, projector, screen, the lot - had to fit through a 30cm by 40cm hole on the surface," Lazar said. "When the police finally worked out where we were getting in, they couldn't believe it was the right place. It was so small."

Henry from Waah is feeling unloved right now because no-one is posting any comments to his blog. So I'll link to his post about credit card signatures, referring to this prank. I can confirm that no-one seem to care about the signature on the credit card slip.

A former boss of mine, a gweilo with a fairly obviously Western name, used to test this out in restaurants. Waiters seemed quite unconcerned when his colleagues who were obviously Chinese signed the credit card slip with a signature that was clearly quite different. They just don't care, apparently.

Fat people stuffing their faces in an all-you-can-eat buffet. Score bonus points for groups of fat people eating together.

Another strange tale from the socialist republic of Singapore, where chewing gum is now available but thinking for yourself is still considered a bit risky.

Eyal applied for a temporary visa to allow him to stay in Singapore whilst he looks for a job, and was told that they couldn't accept his application because he needed to supply proof of his bachelor degree - and he had sent them a copy of his masters degree.