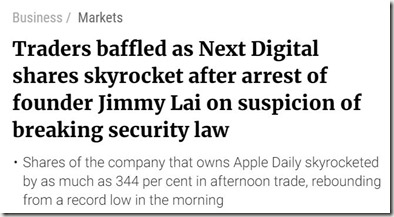 Yes, totally baffling.  Why would Hong Kong people buy shares in Next Digital when Jimmy Lai has been arrested and charged under the National Security Act, and 200 police have searched the company’s offices.

I can’t think of any reason at all why people would buy shares in a media organization that publishes one of the few newspapers that opposes the government.

No, nothing at all.

This is the story:

Shares of Next Digital, the parent company of Hong Kong newspaper Apple Daily, skyrocketed in frenzied trading on Monday, after police arrested its founder Jimmy Lai Chee-ying under the new national security law.

Next Digital, formerly known as Next Media, soared by as much as 344 per cent in the afternoon, before paring some of the gains to 183 per cent to close at HK$0.255.

It marks a dramatic turnaround for the stock in a roller-coaster day of trading. It had fallen 17 per cent in the morning session to a record low of HK$0.075, after news about the arrest first broke.

Traders and analysts were left scratching their heads over the reasons behind the sudden surge in the stock price. Some pointed to speculation that the company could sell its listed entity as a “shell” for other firms to acquire in order to achieve a back-door listing, a common practice among small-cap companies listed in Hong Kong facing dimming prospects.

Aha.  They have updated the headline and the story!

Shares of Jimmy Lai’s Next Digital skyrocket after arrest, amid backing from supporters, speculation about sale of listed entity

Oh, so that's the explanation.  Some people in Hong Kong support Jimmy Lai and Apple Daily.

How unlike the SCMP to miss that angle, though I suppose we have to give them credit for getting there in the end.

Hong Kong ended in 1982 when the British government finally saw the opportunity to divest itself of this barren rock without losing face, something that had been on the cards ever since Quenn Vic was lumbered with it. What is more baffling is that it is taking so long for the corpse to stop twitching. Does anyone genuinely believe that things will get better before the PRC collapses?