In the early weeks of the protests, damage generally got cleared up very quickly so everything could return to normal.  MTR stations re-opened the next morning and services ran normally.  Damaged traffic lights were repaired within a few hours.

By September, things had changed.  The MTR started closing stations near to protests (both planned as well as ongoing).  In October large number of shopping centres were shut, which made life very inconvenient.

Then we moved to the next phase.

Presumably the idea was that the silent majority would blame the protestors.

However, the reality is that the government has the power to do whatever it chooses, and Hong Kong people can’t do much about it.

The proportional voting system for the Legco elections, coupled with the large number of legislators who are not directly elected, mean that it is unlikely that opponents of the government could ever get a majority.  And we have seen that there an endless number of ways that Legislators can be disqualified, and by-elections can be delayed indefinitely, further reducing the ranks of the opposition.

On top of that, many large companies in Hong Kong are reluctant to do anything that might offend the PRC government.  Early in the protests Cathay Pacific was the most prominent example (mainly because of their subsidiary Cathay Dragon), and the MTR is not only 75% owned by the HK government but it also operates the Shenzen Metro (and parts of other metro system in the PRC).

If Hong Kong people can’t effect change by marching in vast numbers, by the protests, or by voting, what is left?

Well, the Hong Kong Institute of Asia-Pacific Affairs (at the Chinese University of Hong Kong) say that 42% of Hong Kong people want to emigrate (pdf), up from 34% last year

Over 3 million are entitled to the currently useless BNO passport (which looks like a British passport, but doesn’t give the holder the right to settle in the UK, which is quite some limitation).

There is the possibility that the British government might do something about that.  However, Foreign Secretary Dominic Raab (did someone say “useless”?) apparently thinks that might “antagonize China and fall foul of the ‘one country, two systems’ approach”.

That could be very annoying for the PRC government.  Troublemakers leaving, to be replaced by an inexhaustible supply of shiny new citizens from the Motherland.  Yes, that would be a bad outcome, definitely.

Of course there are plenty of others here with real passports for Australia, Canada, New Zealand, the United States, and, yes, the UK.  Many of these were acquired back before the Handover when prospects looked bleak.

But the handover went smoothly, and the talk of Chinese troops being sent in to quell the protests has (at least so far) proved to be nothing more than rumour.

The story of the last 22 years has been of Hong Kong slowly becoming more like Mainland China.  Putonghua (Mandarin) is now widely used, and there is a quota of 150 “one-way permits” per day for PRC citizens to settle in Hong Kong.  That’s 50,000+ per year, and more than one million since the handover in 1997. 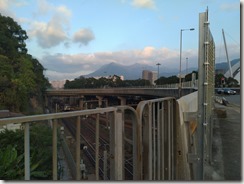 On top of that, many thousands come to Hong Kong for the day, and they are very important for the retail sector.  In fact, one of the biggest economic impacts of the protests was the absence of those visitors.

Which might help to explain why building fences to protect the railway (see right) is a higher priority than repairing traffic lights.