There is no need to build high at all. The developers’ cry, that cities must build high to “survive”, is self-serving rubbish, the more absurd when their towers are left half-empty. The principal reserve of residential space in British cities is derelict land and the under-occupation of existing houses. Unless we wish to build at the squalid densities of Mumbai and Hong Kong, high buildings require space round them and extensive ground servicing.

Almost everyone in Hong Kong lives in high-rise housing (for some striking photographs, take a look at Michael Wolf’s Architecture of Density).  Around 30% of the population live in rented public housing - these are high-rise, high density apartment blocks, but they are safe and certainly not squalid.

Another 17% of people live in high-rise apartments that were sold under the Home Ownership scheme.  Not squalid either.

50% of the population live in private housing, the vast majority of which is in high-rise towers, which vary from small and basic to large and luxurious.

Lynsey Hanley used to live on Europe’s largest public housing estate (in Birmingham), and her excellent book “Estates” offers a very personal account of how the British government’s housing policies went horribly wrong and wrecked many people’s lives.  She has a more informed - and nuanced - view of the problem:

Tower blocks are generally held to be the least popular form of housing, particularly for people raising families. [..] But that’s not to say other people don’t enjoy living there, for the astonishing views, and for their self-contained nature – which in the most successful cases creates a tight-knit community.

Problems mostly arise when housing managers fail to keep on top of repairs, safety issues, residents’ complaints and other bugbears, such as blocked bin chutes and noisy neighbours. On-site caretakers, when landlords decide they can afford to employ them, solve many of these issues.

Hong Kong not so good–MTR interchanges

The MTR “train trip planner” recommends that for early and late departures from East Rail stations to the airport you should go via Hung Hom, Nam Cheong & Tsing Yi.  This seems like bad advice, because it requires you to use two of the worst interchanges on the MTR:

At Nam Cheong, you can stroll across from a northbound West Rail service to a southbound Tung Chung line train (towards Central), but if you want to switch to the northbound service (to get to or from the airport) it takes five minutes to go down, across and then up again.

At Tsing Yi, the Tung Chung line and Airport Express tracks run parallel to each other (picture from here).  But here there’s not even one cross-platform interchange - you need to go all the way down to the ground level, cross under the tracks and then go all the way back up again.  Which probably takes 5 minutes. Would it really have been so difficult to provide a simpler and quicker cross-platform interchange?

Of course there are plenty of very good interchanges.  To switch between the Kwun Tong line and the Tsuen Wan line you simply have to walk across the platform at either Mong Kok (same direction) or Prince Edward (opposite directions).  But you should ignore this misinformation.

Or there’s Yau Tong, North Point or Lai King.  Here, the most common interchanges are cross-platform, with a short walk up or down if you are going in the other direction.

Admiralty (plan) is good for the Tsuen Wan line to Island Line, but now there’s also the South Island Line, which is 3 or 4 levels down (past the so-called Sha Tin to Central link platforms, opening not very soon).

Others are not quite so easy.  You’ll have a long walk at Quarry Bay (or a long wait for a lift), but North Point is an easier alternative for most journeys.

Kowloon Tong is a very busy interchange with a bit of a walk from one line to the other, and the layout is somewhat confusing.  It was designed as an interchange station - the Kowloon Canton Railway (KCR - now known as MTR East Rail) started operating in 1910, Kowloon Tong station KCR station only opened in 1982, a couple of years after the MTR station - but the physical layout of the two lines makes it difficult to do any more.

As an alternative you can change to West Rail at Hung Hom (not bad - cross-platform interchanges available, if you don’t mind waiting sometimes) and then again at Tsim Sha Tsui but that’s really two separate stations for East Rail and the Tsuen Wan Line (to be fair, it’s shown quite clearly on MTR maps).

The normal route from East Rail stations to the airport is via Kowloon Tong, Prince Edward, Lai King & Tsing Yi.  That’s one one extra change, but two of them are simple cross-platform interchanges.  It’s also clearly a more direct route. 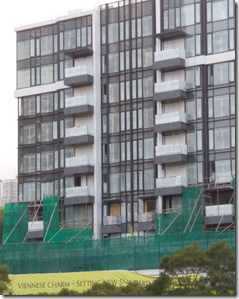