Interesting article from the BBC about red minibuses in Hong Kong.

Things I learned from this: red minibuses first appeared in 1967; green minibuses started in 1980; the government wants to phase out red minibuses and replace them with the more regulated green version.

In a city with one of the world's best public transport networks, the cheap, fast, accident-prone red minibus survives.

The former British colony has the world’s largest fleet of double-decker buses, 18,000 taxis, and a spotless, efficient subway system known as the MTR. And yet, every day, thousands of people opt to ride one of the 1,138 red-topped, 16-seat Toyota Coaster minibuses that are notorious not only for their speed, but for their eccentric drivers, unregulated fares, and tendency to smash into other vehicles.

It’s a system that dates back to 1967, when the Cultural Revolution spilled over the border from China. Left-wing agitators were intent on overthrowing the colonial British government, and Hong Kong was crippled by protests, strikes and riots. When drivers from the city’s major bus companies went on strike, shared taxis that had long served the rural New Territories began to illegally pick up passengers in the urban areas of Kowloon and Hong Kong Island. The colonial government decided to legalize this additional service.

Today, the government mandates the number of seats and the type of vehicle that may be used as minibuses, which it refers to officially as “public light buses.” Other than that, drivers are free to determine their own routes and fares. Drivers are free agents who rent the vehicles for a shift — the going rate is HK$800 per day — which gives them extra incentive to drive quickly and pick up as many passengers as possible.

Hong Kong not so good–Airport Express

Well, not really - the Airport Express is generally very good.

The trains now terminate at Asiaworld-Expo, which is odd for an airport express, but it brings the MTR some additional revenue and normally it doesn’t create a problem

Except when, after a concert, the trains arrive at the airport full of passengers.

That means standing room only, and sometimes barely even that.

That’s not good enough when you are paying a premium fare.  A one-way Airport Express ticket to Hong Kong station costs $100.  Fares for events at Asiaworld-Expo are significantly cheaper (e.g. $36 each way to Hong Kong station if you use your Octopus card and make a return trip, which is what most people will do).

OK, the Airport Express do offer many different discounts, but the best deal from the airport is still around $70 - double the AsiaWorld-Expo price (and many people either don’t qualify for discounts, or don’t know about them).

And, yes they did recently increase the price of group tickets by around 12%.  They seem to have kept that quiet.

Given that there is plenty of spare capacity, couldn’t they run extra trains, starting at the airport?  Or restrict the Asiaworld-Expo passengers to one half of the train and put airport passengers in the other half?  They have done that in the past when there were big exhibitions (though that is different, because you don’t get a surge of people at one time).

Not only are the trains full, but there are then very long queues for taxis at AE stations – which is not what you want when you have spent several hours traveling to Hong Kong.  The solution for that should be even simpler – surely taxi drivers would respond if they knew there was demand?

Chinese airlines are consistently late for this one surprising reason.

- It's not a surprising reason (spoiler alert: it's the military closing the airspace)

Wednesday's rather boring story in the paper, with a clickbait headline online

Except that it wasn't a Basketball court!  From Google Street View, it looks more like a public toilet: 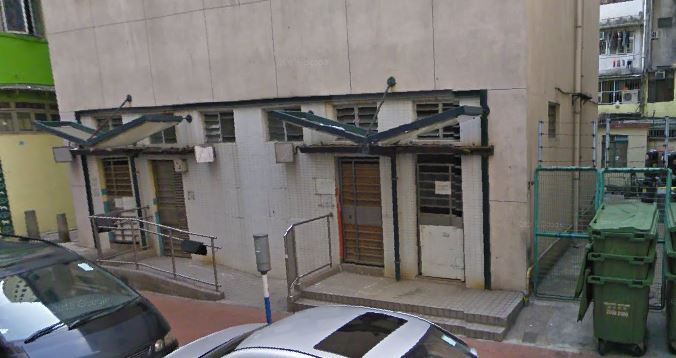 After the woman who tried to push past me and fell into the gap between the train and the platform, another pleasing outcome…

A woman is walking along, typing something into her mobile phone.  I walk past her and into the lift.  The doors close (I didn’t touch the button, honest).  She is left outside.  She is not happy.

I’m always interested in other views of the MTR, including this one:

I jumped onto Google looking for hotels that would be convenient to the rail line from the airport.  Yikes! 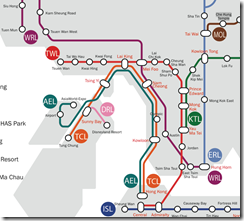 Is it my imagination, or am I seeing that:

Don't airport lines, where people are hauling luggage, need to be designed so that they plug into the network with relatively few, well-designed transfers.

Not in London, where the Heathrow Express only takes you to Paddington.  OK, so Crossrail the Elizabeth Line will offer better (but slower) connections throughout Central London, when it opens in 2018.

Not in Bangkok, either, which doesn’t even have one convenient connection.  Does Shanghai?

That’s a strange map of the MTR system, though.  The terminus of the Airport Express (Hong Kong station) is connected to Central station through an underground walkway.  This offers plenty of easy ways to get to the rest of Hong Kong island and most of Kowloon.

If you don’t mind waiting, the so-called Sha Tin to Central link will provide more simple interchanges – and if they ever finish the new train terminus in West Kowloon, it should be easy to walk from Kowloon station to Austin (on West Rail).

Also, most major hotels can be reached through free shuttle buses from either Kowloon or Hong Kong station.  Or taxis are a good, reasonably priced option (although there can be long queues at Hong Kong station).