As previously noted, LeTV won the Hong Kong TV rights to the English Premier League for three seasons (starting in August 2016), and then did a deal with PCCW’s Now TV - so both will be showing the games for the next 3 years.

Let me just push past you–whoops

The MTR is a world-class public transport system.  The passengers – not so much.  Leading to everyday frustrations, with the occasional moment of madness.

Case one - trying to get off a crowded train.  Doors open.  I say “Mh Goi”, but no-one moves, so I have to force my way out through a crowd of bodies.

Case two - waiting to get off a very un-crowded East Rail train heading for Lo Wu.  Doors open.  Two passengers try to push past me.  I stand my ground.

One of them actually fell down into the gap between the train and the platform.  I’m still not sure how they managed to do that, but I hope they had a safe journey back home.

Netflix arrives in Hong Kong, followed by House of Cards

Netflix has indeed launched in Hong Kong – and most of the rest of the world (apart from China).

Initially, House of Cards wasn’t available.  Yes, that’s right – the series for which Netflix is best known wasn’t available on Netflix.  Along with a lot of other shows.

The good news is that Netflix Hong Kong does now have the Netflix series House of Cards1.  Good work, Netflix people.

1 As pointed out below, they currently only have the first 3 series, which in no way diminishes the achievement by Netflix Hong Kong in securing the rights to a Netflix owned drama series.

I can believe it's not butter 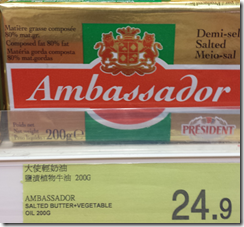 It certainly looks like butter - and the shelf label says “salted butter plus vegetable oil”, though apparently the official name is "President’s Ambassador Salted Culinary Fat Blend" (which really sounds delicious, doesn't it).

What is the first ingredient?  Hydrogenated vegetable oil.  There is some butter, but it’s the third ingredient, so probably less than 20%.

President should be thoroughly ashamed of themselves for selling this product in Hong Kong.

Yes, it does contain trans fats.

[See also a later post about this product containing glycidol and 3-MCPD]  .