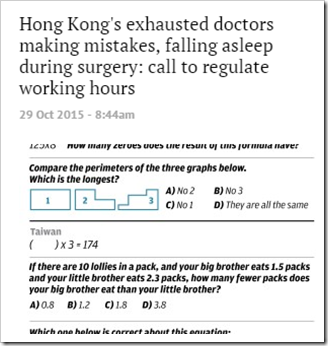 Doctors make mistakes on maths tests because they are exhausted?

A really good article in The Guardian today:

The death and life of the great British pub

The Murphy family, John, Mary and their adult son Dave, were preparing to spend a 33rd Christmas as landlords of the Golden Lion pub in Camden, north London when they heard the rumours. A mysterious figure was said to be looming in their corner of the industry, harrying publicans, striking down premises. There was “a Grim Reaper of pubs”, the Murphys were told, and he was circling their handsome Victorian building on Royal College Street.

It was December 2011. In front of the pub’s eyelash-shaped bar, beneath a blackboard that, for as long as anyone could remember, had advertised a heavy discount on tumblers of Irish Mist, the family met with a representative of Admiral Taverns. Admiral was the large pub-owning company – a pubco, as they are known in the trade – that leased the Murphy family their tenancy at the Golden Lion. “The rep told us she had bad news,” said Dave Murphy, a solid, red-cheeked man in his 40s.

It’s a long article, but worth a few minutes of your time.

See also Be careful what you wish for on a similar subject.