SCMP is responsible online, but sensationalist in print 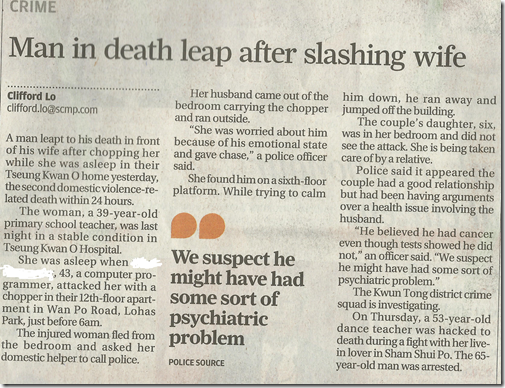 It includes the following two paragraphs:

Police said it appeared the couple had a good relationship but had been having arguments over a health issue involving the husband.

“He believed he had cancer even though tests showed he did
not," an officer said. “We suspect he might have had some sort of
psychiatric problem”.

You will note that the last sentence is repeated in extra large type, even though it is nothing more than speculation.

Then read the same story on their website, without the comments from police sources, and without the name of the man:

A 43-year-old man leapt to his death this morning after stabbing his wife while she was asleep at home in Tseung Kwan O – the second domestic violence case reported within 24 hours.

The woman, 39, was attacked by her husband shortly before 6am inside their 12th-floor apartment at Lohas Park on Wan Po Road.

The woman jumped out of bed and ran out of the apartment, but her husband chased her with a chopper in his hand, according to police.

She ran to the sixth-floor platform above the building’s car park and sought help from another person there, saying “My husband chopped me,” a police officer said. She suffered wounds to her head, face and hands.

The husband, who was following her, then jumped from the platform, the officer said, and was later found lying unconscious six floors down on the ground. The knife was next to him and had snapped in two. He was taken to Tseung Kwan O Hospital, where he was declared dead.

So why can they publish a reasonably responsible story on their website, but it becomes sensationalist nonsense once it gets into the printed newspaper?