Pay as you read

Interesting piece from Gweipo about newspapers:

Buy a newspaper - save a journalist?

I've been subjected to a barrage of emails of late by the IHT.  And the Wall street journal.  And the NYT. [..] Why did I resist?  A few main reasons.  I just hate all that paper coming into the house - even if I'm now living in an area that professes to recycle and even will reward me for doing so through their "Grin" Scheme. (Honest, they don't have to, my guilt to the environment is enough to keep me recycling forever and forever amen).  Then there is that thing of other waste - as in, I subscribe, but some weeks I'll read the paper every day, and sometimes weeks on end go by with the paper piling up, in it's little plastic bag against the rain (double guilt, double waste) unopened until I separate the paper and the plastic and throw them all out.  And finally the fact that it's available online and on air.  Oh, and they don't have suduko (the saving grace of the SCMP - honest, ask any expat wife, they all start with that section).  And their comics are pathetic - old fashioned, boring and irrelevant to an international audience.

You see, the best thing about my IHT subscription to be honest, was unlimited access to the NYT.  And, in the days that I didn't get to read the newspaper, I could skim through my daily email from the NYT and click on the articles that were interesting.  Now, I can still do that.  I'm limited to 10 articles a month - but, often that's enough.  And it's a kind of rationing - do I really like that journalist enough to click through or is it going to be a same old same old?

The article generated a response from Joyce Hor-Chung Lau, an editor at the International Herald Tribune (writing in a personal capacity):

I do pay for online content -- I feel responsible to do so. One pet peeve are people (not you) who say, "I love your paper, but I get annoyed when I get blocked after 10 articles." I want to shake them and ask why they expect content to come for free? And these are not poor people -- mostly HK professionals. One was my dentist. It was hard for me to retort, w/ the metal instruments in my mouth. But I wanted to ask him if he had qualms about asking me to pay for my dental care!

It would be nice if the media industry made it easier to buy a la carte articles. Often, I see one article I'd like to read -- and would be happy to pay a few bucks if I could click one PayPal button. But then I'm asked to buy a whole year's subscription or have to fill in some form, and I give up.

Yes, the ‘micro payments’ model ought to work, but how much would people pay per article?  Would it be worth collecting the money?

It’s interesting that the SCMP has stuck with charging for its website for so many years, whilst other papers have either stayed free or have tried different approaches to charging, usually without much success.  SCMP.com now allows access to a certain number of articles free of charge (the same as the New York Times and the Financial Times, but unlike The Times) and the website is much better than before.  Unfortunately the content (of the newspaper and website) is getting worse - and reduced revenue must be one reason.

People may be reluctant to pay for web access, but apparently they will pay for content on iPad and Kindle.  I do.  I happily pay about US$0.60 per day for The Guardian on the Kindle, but I hated their iPad app.  The Kindle experience is less than ideal for magazines, but at little more than US$1 per week (each) for The Spectator and the New Statesman I’m not complaining.  The question is whether this will be enough to save newspapers and magazines.

I think I may have noticed a theme to these “Dean Fung English” articles" in the Hong Kong Standard: 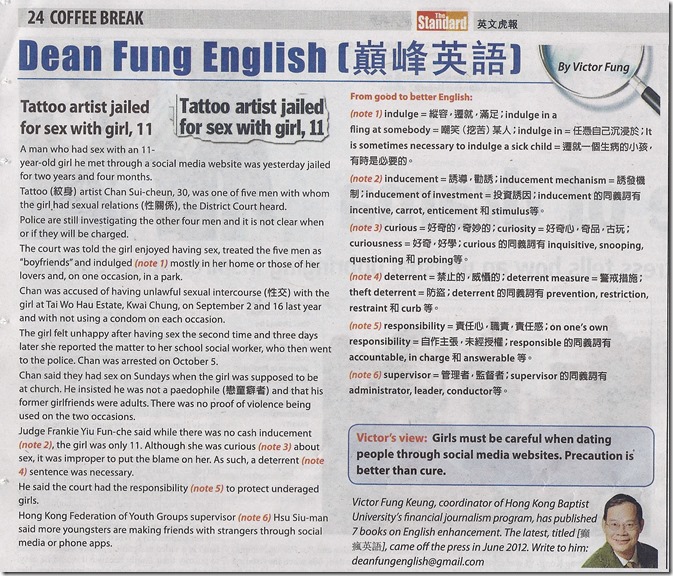 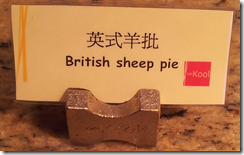 Spotify - in Chinese, of course

I’m obviously not paying attention, so I only found out from Spike that Spotify is now available in Hong Kong.

There’s the usual pantomime with a default page that is only in Chinese, and no obvious way to change to English.  Google Chrome makes it easier by translating it (rather badly), otherwise you would be left with having to know the Chinese characters for English.  No, me neither.

Why is the SCMP still printing these tedious letters from Pierce Lam?  As well as attacking the ESF (yawn) he is now trying to defend the “designated schools” scheme:

Why officials should end ESF subsidy

As the new policy gives priority to siblings and children of alumni, it perpetuates non-Chinese speakers' preferential admission.

According to ESF CEO Heather Du Quesnay, the new system would not "reduce the number of non-Chinese students at ESF schools" ("ESF ends priority for non-Chinese speakers", February 5). The ESF's selling of nomination rights and questionable test on "parental commitment" won't moderate the warped effects of its old policy.

Betty Bownath is right about the importance of non-Cantonese speakers' "integration into mainstream public schools" and "full immersion with extension or support classes for Chinese being the fairest and best option for ethnic minorities" ("Segregation still confronts ethnic students", March 22). But she misunderstands The New York Times article of March 10 and wrongly criticises Hong Kong's "designated schools".

Under Hong Kong's 12-year compulsory education, every school-aged child is guaranteed a school place. But, as the city is demographically 96 per cent Cantonese-speaking, the average public school isn't well prepared for the special needs of non-Cantonese speakers. Designated schools are mainstream schools which have joined a government scheme whereby they receive additional funding for the purpose of implementing school-based measures to help non Cantonese-speaking students.

Ms Bownath has overlooked the encouraging experience of Talwinder Singh, a designated school student who features in The New York Times article. He said he was glad to be in a designated school and would feel alone in a mainstream school. He said his teachers knew how to deal with minority students. He is thinking of universities after graduation this summer from a "designated school" where he studies alongside the school's Cantonese-speaking students.

The government should cut the ESF's subsidy because of that institution's practice of segregation based on linguistic discrimination, and divert such funding to help more mainstream schools develop the capability of designated schools and serve all ethnic minorities, native English speakers included, equally.

The problem with Pierce Lam is that he decided a long time ago that the ESF was a dastardly plot by the evil colonial administration and nothing could possibly convince him to change his mind.  So, even when they abolish the priority for non-Cantonese speakers (that he has been complaining about for years) he argues that nothing has changed.

On the other hand, when the government claim that their “designated schools” scheme is a serious attempt to cater for non-Cantonese speakers, he is convinced that this must be true.  Because of course, the Hong Kong government can be trusted, unlike the wicked witch Heather Du Quesnay and the rest of them over at the ESF.

Here’s another article which comes to a similar conclusion as the one in the New York Times:

Racism in the classroom?

Li Sing Tai Hang School in Causeway Bay, is one of 28 designated schools in Hong Kong that receive additional funds and resources from the government to help minority students. During the central allocation process, where the Education Bureau divvies up pupils according to the ‘school nets’ they are located in, most minority students end up being assigned to a designated school even if it isn’t located within their net. According to the Education Bureau, at present, among some 12,000 non-Chinese speaking students, about 60 percent are studying in designated schools.

“It’s racial segregation,” says Fermi Wong Wai-fun, executive director of Hong Kong Unison, a non-governmental organisation focusing on helping minority groups. Wong says up to 80 percent of minority students attend designated schools – but, she claims, some Hong Kong parents become unwilling to choose these schools for their children. “They [minority students] have been living and studying in a very narrow social circle and have become disconnected with the mainstream society. It will harm social integration,” says Wong.

But I have probably “misunderstood” this article, just like Betty Bownath did with the one in the New York Times, and really it is a fantastic scheme.