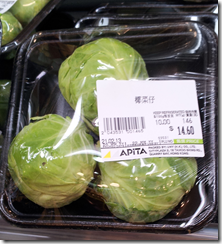 I saw this recently in a supermarket.  I mean, who buys three brussels sprouts?  And 40p each?

Shows how much I watch TV…

Apparently TVB Pearl switched to High Definition back in November.  I only noticed last week when watching a Jamie Oliver programme.  It seemed very clear, but I assumed that was just because it was digital TV.  Then I saw the "TVB Pearl HD" logo.

Here’s what they did:

Revision of the Generic Code of Practice on Television Technical Standards

In response to a joint application of Asia Television Limited ("ATV") and Television Broadcasts Limited ("TVB"), the CA approved revision of the Generic Code of Practice on Television Technical Standards which will take effect in October 2012 upon gazettal.  The revision allows the two Digital Terrestrial Television ("DTT") broadcasters to switch from MPEG-2 to H.264 as the video coding for four simulcast television programme channels around end October.  The use of H.264 coding will enhance the picture quality of the four simulcast channels and open up the possibility of providing more programme channels, introducing high definition television ("HDTV") or three-dimensional television services.  The CA also noted that TVB would upgrade the Pearl Channel from standard definition television to HDTV upon the change of the video coding.

The change of video coding from MPEG-2 to H.264 will be seamless to most viewers.  Only a small portion of DTT receivers may require minor user intervention, such as re-scanning DTT channels on the receiver, for resuming normal reception after the change.  The two broadcasters will make public announcement before effecting the change and maintain service hotlines to respond to public enquiry during the changeover period.

Hong Kong winter,  a.k.a. British summer.  Me in shorts, locals dressed up warmly because it’s “cold”.

A few cooler days, but plenty of days when it is a very comfortable 20 centigrade or more.

Here's the forecast for the next few days:

This is a family newspaper, right?

Yes, the story chosen for the Hong Kong Standard’s “Dean Fung English” column today is about the doctor who was accused of indecent assault. 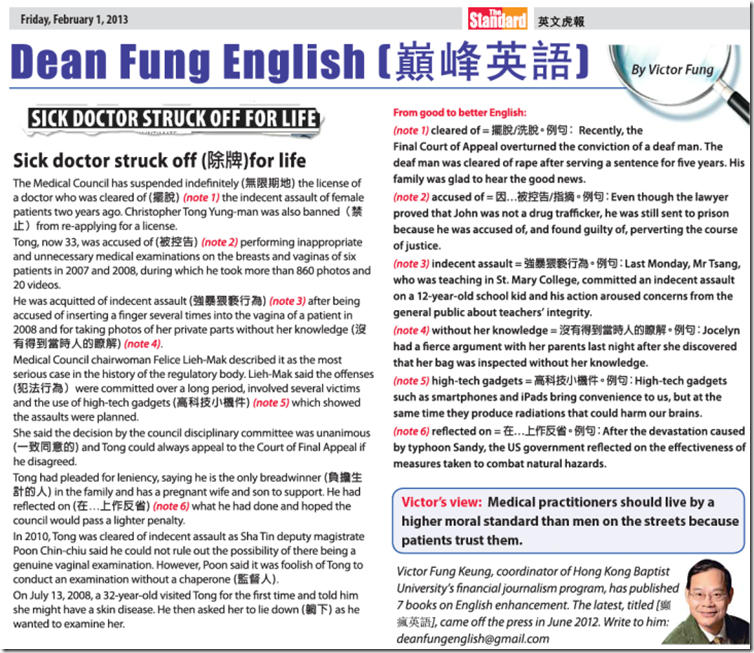