I think they mean “pore”

Headline in the sub-Standard: Chan poised to pour over MPF fees 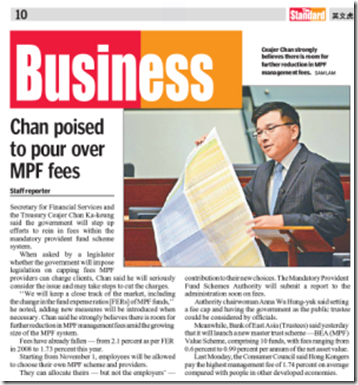 Cheung Man-kwong, a former lawmaker experienced in politicking for "democracy" and a local teachers' union, shows his true colours in the SCMP debate on public subvention for the English Schools Foundation (October 15).

He counsels that as "we have given the ESF a lot of subsidies and land in very good locations for the building of its schools" it should "serve the people it is supposed to serve". Whom is ESF supposed to serve?  It is mandated to serve, without racial or religious discrimination, children "who are able to benefit" from "a modern liberal education through the medium of the English language".

However, Mr Cheung defies this fair statutory provision and asserts that ESF should serve preferentially "the children of foreign nationals working in Hong Kong, or non-Chinese residents". He advocates foreigners' exclusive entitlement to subsidised international education, and objects to international schools' admission of "local children who can go to [Direct Subsidy Scheme] DSS schools" which "are intended to serve locals".

Local students prefer international education because the public exams taken by international schools are easier in content and grading compared with local exams. In 2008, Britain's National Recognition Information Centre rectified the unfairness and recognised that a Hong Kong C grade was equivalent to a British A. When Mr Cheung represented the education profession in the legislature, he was complicit in the injustice of making local exams unnecessarily harsh.

Does Pierce Lam really believe that if he repeats this often enough it will become true?  It’s parents who make the decisions, and they do NOT choose international schools because exams are easier.  Anyway, ESF schools use IGSCE exams rather than the oft-criticized UK GSCEs and the IB Diploma rather than A levels.

I can’t find any published statement from Britain's National Recognition Information Centre comparing Hong Kong examinations with UK exams, but Pierce doesn’t tell us which exams are being compared - and I doubt that it is an IGCSE.

Mr Cheung treats local students as captive customers to support local teachers' employment. He wants difficult exams to give local education the appearance of a high standard and needs stringent grading to facilitate allocation of local universities' limited places. His crony democracy renders him unable to consider measures to raise local teachers' standards. He is blind to the need for fair competition in education.

Back in February the very same Pierce Lam was apparently defending local schools (it’s often hard to tell what point he is trying to make, but the SCMP sub-editor titled his missive “In defence of the local system”), yet he is now claiming that Cheung Man-kwong “wants difficult exams to give local education the appearance of a high standard.”

I am fascinated by the concept of “fair competition in education” and look forward to hearing more about that.

How many Booker Prize winning books do you own?  How many have you actually read?

I can’t be the only person who buys them and then either gives up after a few pages or never quite gets round to even starting them.

I started reading Peter Carey’s True History of the Kelly Gang (which won in 2001) but found it intensely annoying, and I also hated Tim Parks’ Europa (which was shortlisted in 1997), though I greatly enjoyed his later Dreams of Rivers and Seas, which wasn’t nominated, and also his non-fiction.

I bought the hardback of Graham Swift’s Last Orders (winner in 1996) because I had read and enjoyed several of his earlier works, but somehow I haven’t got round to this one.

I nearly bought Yann Martel’s Life of Pi for my Kindle when it was reduced to 99 cents at the end of last year (as the Kindle Deal of the Day), but it wasn’t available for customers in Asia Pacific.  It turned out that I had bought the paperback and not read it.  So I did read it, and very good it was too.  There’s a film coming out soon.

I have a paperback copy of last year’s winner (Julian Barnes - The Sense of an Ending) but I haven’t read that either.

But I have read Hilary Mantel’s Wolf Hall which won in 2009. I even bought the sequel Bring up the bodies before it was nominated, and this week it was announced that it has won the Booker Prize.  Success.

Some interesting discussion at Ulaca about the Lamma Ferry accident:

Besides the obvious safety issues raised by Monday’s collision between two ferries which resulted in at least 38 deaths, coverage of the accident has raised ethical concerns both journalistic and ferry industry-related.

A reporter called Lo Wei sets the tone on the front page with his or her piece about one of the families travelling on the Lamma IV (the Hongkong Electric boat). Lo writes “They had just settled in to enjoy the outing when a ferry crashed into their vessel.”

Then, on page 2, Alex Lo and Amy Nip get only as far as their second paragraph before they write “barely ten minutes after they had left Lamma Island, the vessel owned by Hongkong Electric would be struck by a ferry, causing its stern to sink”.

Perhaps it is no coincidence that the previous day’s SCMP had carried an article headlined “38 die in Hong Kong ferry disaster”, credited to staff reporters, in which Hongkong Electric’s Director of Operations, Yuen Sui See, was quoted as saying, without proffering any evidence for his assertion, "The ferry rammed the side of our boat. They didn't bother and just left".

Read the full posting and comments over at Ulaca (link above).