Not a big surprise.  It was an interesting concept, but the combination of being known as a budget airline (and one that is owned by a PRC company) and flying to Gatwick (rather than Heathrow) appears not to have been a winner.

London's business-class-only link to Hong Kong is to be axed after just six months – providing more evidence that insufficient numbers of airline passengers are prepared to pay a premium to avoid the riff-raff.

Hong Kong Airlines launched the luxury flight from Gatwick in March. But this week the company said flights would end on 10 September. A statement blamed "the continuing weak economic outlook in Europe". In recent weeks, many flights on the route have been cancelled.

The aviation consultant, John Strickland, said: "It reflects the highly competitive nature of the Hong Kong-London market, one where there is substantial capacity from established players and not enough premium traffic to support the dedicated business service of a newcomer."

Hong Kong Airlines' service was launched with much fanfare in March, using new Airbus A330 aircraft configured with just 112 seats – 78 in "Club Classic", roughly between premium economy and business, and 34 in "Club Premier", with lie-flat beds.

Fares were set to undercut rival carriers, at less than £2,000 for the cheaper class and £3,000 for the top grade. But many seats have flown empty, and the schedule obliges an aircraft to stand idle on the ground at Gatwick for 15 hours between arrival and departure.

This was the same problem Oasis had, of course.

It is the second time a Gatwick-Hong Kong venture has failed; Oasis Hong Kong Airlines went bust four years ago after flying the route from Sussex to the Far East for 18 months. But unlike Oasis, Hong Kong Airlines is still very mch a going concern, and no passenger with a forward booking will lose out. They will either be rebooked on Air New Zealand, BA or Virgin, or given a full refund. Juliette White, from Jersey, is booked to fly with Hong Kong Airlines from Gatwick in October. She said: "I'm hoping for a replacement ticket on another airline. I do not see me getting a business-class flight as cheaply if I have to rebook."

The crazy world of Kindle e-books

The price of Kindle books continues to baffle.  There are plenty of bargains, but an equal number of titles that seem hugely over-priced.

If you want to know when the prices do drop, then eReaderIQ is a useful service.  You enter the Amazon ASIN code and either a target price or a price drop and they will send you an email notification.

What I find baffling is that so many of the titles on my list have gone up in price, often quite significantly:

Both of Emma Kennedy’s books have fallen in price but haven’t yet reached the rather arbitrary price target I set.

After watching “The Iron Lady” on a plane, I snapped up “The Downing Street Years” for a very reasonable $3.59 (plus $2 surcharge) but baulked at paying $4.49 for the companion volume. It then more than doubled in price and has now reached the giddy heights of $12.99, so I guess I’m going to have to wait for that pleasure.

I’m fairly sure that I don’t need to read Hank Paulson’s self-serving account of the financial crisis, but if it gets cheap enough I suppose I will be tempted.  No sign of that happening, though.

I purchased the second volume of Chris Evans’s autobiography and enjoyed so it, so I put the first volume on price watch, but it has increased since then.  As has Frank Skinner’s autobiography.

Peter Hennessy’s “Having it So Good: Britain in the Fifties” did drop $2.00 (to $7.99) but the current price is a rather off-putting $15.39.  Strangely, the companion volume about the immediate post-war period increased by $2 at the same time as the first price drop, only to return to $9.99 about a month later.

I have also purchased several titles in paperback because they are cheaper that way – such as Hilary Mantel’s Bring up the Bodies ($15.90 on Kindle) and Claire Tomalin’s Dickens biography (a scarcely believable $21.99).

How to drive your best employees away

What I hadn’t previously realized was that they use the stupid “stack ranking” system. Maybe it worked well at GE in Jack Welch’s days -  it’s possible that firing 10% of employees every year was a smart strategy for them - but whoever thought that was the answer for Microsoft was definitely asking the wrong question.

It worked real well for Enron as well.

[..] At the center of the cultural problems was a management system called “stack ranking.” Every current and former Microsoft employee I interviewed—every one—cited stack ranking as the most destructive process inside of Microsoft, something that drove out untold numbers of employees. The system—also referred to as “the performance model,” “the bell curve,” or just “the employee review”—has, with certain variations over the years, worked like this: every unit was forced to declare a certain percentage of employees as top performers, then good performers, then average, then below average, then poor.

Supposing Microsoft had managed to hire technology’s top players into a single unit before they made their names elsewhere—Steve Jobs of Apple, Mark Zuckerberg of Facebook, Larry Page of Google, Larry Ellison of Oracle, and Jeff Bezos of Amazon—regardless of performance, under one of the iterations of stack ranking, two of them would have to be rated as below average, with one deemed disastrous.

For that reason, executives said, a lot of Microsoft superstars did everything they could to avoid working alongside other top-notch developers, out of fear that they would be hurt in the rankings. And the reviews had real-world consequences: those at the top received bonuses and promotions; those at the bottom usually received no cash or were shown the door.

Outcomes from the process were never predictable. Employees in certain divisions were given what were known as M.B.O.’s—management business objectives—which were essentially the expectations for what they would accomplish in a particular year. But even achieving every M.B.O. was no guarantee of receiving a high ranking, since some other employee could exceed the assigned performance. As a result, Microsoft employees not only tried to do a good job but also worked hard to make sure their colleagues did not.

“The behavior this engenders, people do everything they can to stay out of the bottom bucket,” one Microsoft engineer said. “People responsible for features will openly sabotage other people’s efforts. One of the most valuable things I learned was to give the appearance of being courteous while withholding just enough information from colleagues to ensure they didn’t get ahead of me on the rankings.”

Worse, because the reviews came every six months, employees and their supervisors—who were also ranked—focused on their short-term performance, rather than on longer efforts to innovate.

“The six-month reviews forced a lot of bad decision-making,” one software designer said. “People planned their days and their years around the review, rather than around products. You really had to focus on the six-month performance, rather than on doing what was right for the company.”

There was some room for bending the numbers a bit. Each team would be within a larger Microsoft group. The supervisors of the teams could have slightly more of their employees in the higher ranks so long as the full group met the required percentages. So, every six months, all of the supervisors in a single group met for a few days of horse trading.

On the first day, the supervisors—as many as 30—gather in a single conference room. Blinds are drawn; doors are closed. A grid containing possible rankings is put up—sometimes on a whiteboard, sometimes on a poster board tacked to the wall—and everyone breaks out Post-it notes. Names of team members are scribbled on the notes, then each manager takes a turn placing the slips of paper into the grid boxes. Usually, though, the numbers don’t work on the first go-round. That’s when the haggling begins.

“There are some pretty impassioned debates and the Post-it notes end up being shuffled around for days so that we can meet the bell curve,” said one Microsoft manager who has participated in a number of the sessions. “It doesn’t always work out well. I myself have had to give rankings to people that they didn’t deserve because of this forced curve.”

The best way to guarantee a higher ranking, executives said, is to keep in mind the realities of those behind-the-scenes debates—every employee has to impress not only his or her boss but bosses from other teams as well. And that means schmoozing and brown-nosing as many supervisors as possible.

Like other employees I interviewed, Cody said that the reality of the corporate culture slowed everything down. “It got to the point where I was second-guessing everything I was doing,” he said. “Whenever I had a question for some other team, instead of going to the developer who had the answer, I would first touch base with that developer’s manager, so that he knew what I was working on. That was the only way to be visible to other managers, which you needed for the review.”

I asked Cody whether his review was ever based on the quality of his work. He paused for a very long time. “It was always much less about how I could become a better engineer and much more about my need to improve my visibility among other managers.”

In the end, the stack-ranking system crippled the ability to innovate at Microsoft, executives said. “I wanted to build a team of people who would work together and whose only focus would be on making great software,” said Bill Hill, the former manager. “But you can’t do that at Microsoft.”

Typhoon Tembin - all over the place 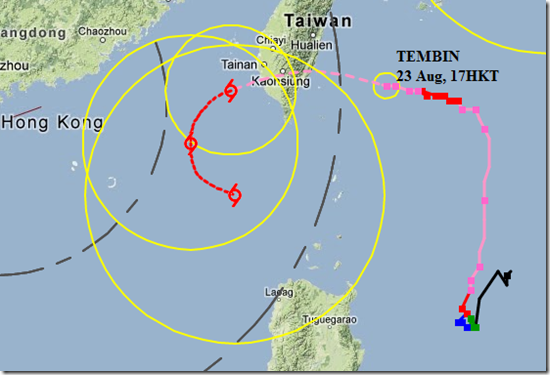 Apparently the problem is another storm (Bolaven) in the same area.