Wimbledon (back) in the Football League

Congratulations to AFC Wimbledon.  Nine years ago, the Football League allowed the owners of Wimbledon FC to move the club to Milton Keynes.  The fans set up their own club, but they had to start in the Combined Counties League.   Five promotions later they are in the Football League:

As football's reputation continues to be tarnished by soaring debt, political scandal and superinjunctions, proof is needed that the sport retains a soul. Step forward AFC Wimbledon. Under dark Manchester skies, the club formed by supporters for supporters produced a golden moment on Saturday, overcoming Luton on penalties to win the Blue Square play-off final and seal their place in the Football League.

"It only took nine years," bellowed the delirious fans in blue, moments after Wimbledon's captain and top scorer, Danny Kedwell, had crashed in the spot-kick that gave his team a 4-3 victory following the 120 minutes of stalemate. The chant rose in volume and fervour from the end where the drama had eventually unfolded and told of the story that has captivated football romantics.

It’s hard not to feel sorry for Luton fans.  Their club suffered three successive relegations - from the Championship through Leagues One & Two to the Blue Square Premier, in part because of points deductions imposed by the Football League for financial irregularities.

It can benefit people as it enables them to chat with friends and it can help them to relax.

However, it does have some drawbacks. Some people will misuse it and internet users should take care when communicating with strangers. They should think about what information they disclose online. Also, students must avoid becoming obsessed with Facebook. If they stay up late, it could affect their performance in school.

Er, thanks for that good advice.

Ah, the FA Cup Final.  Used to be the only club game played at Wembley, and the only one that was live on TV.  Now we have the FA Cup semi-finals at Wembley, play-off finals, the League Cup, the Charity Community Shield and I don’t know how many other matches played there.  And hundreds of games live on TV.

There was a time when winning the FA Cup was also special because it provided entry to the Cup Winners Cup, but today it gives entry to the interminable Europa League, and the place usually goes to the runners-up (when the FA Cup winners are a big club who have qualified for the Champions League).

It also used to mark the end of the football season, but now we always have play-off finals after the FA Cup final, and this year there’s another set of Premier League fixtures coming up  next weekend – but worse than that we actually have four Premier Leagues matches being played at lunchtime today, including the game that will most likely see Manchester United being confirmed as champions, so you could argue that the FA Cup Final isn’t even the biggest game being played today.

Still, at least we have “It’s a Cup Final Knockout” on BBC One.  Surely?

An odd article in the SCMP about Cathay Pacific possibly introducing Premium Economy:

The remodelling of Cathay Pacific's business-class seats is completed and the airline is hoping to finalise the roll-out of new "premium economy" seats by the end of this year. The new cabin class announced last year aims to offer an option for passengers wishing to trade down from business class - for reasons of cost-cutting - as well as those who don't want economy class.

Remodelling is completed?  But only a handful of planes have the new seating (as they confirm later in this same article), and I don’t think they’ll complete the rollout this year. 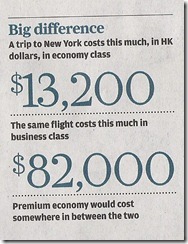 Details of the new seating configuration have not yet been revealed, but people familiar with the situation said the new seats would be 20 to 30 per cent larger than existing economy seats in terms of floor area. The cheapest seats of Hong Kong's flag-carrying airline are 44cm wide and rows are spaced 81cm apart in the economy section. With an enlargement of 25 per cent, the width and so-called seat pitch will be roughly 53cm and 1 metre respectively.

That will put the seats in line with, if not better than, the same class of seats offered by other airlines such as Virgin Atlantic and British Airways.

Cathay Pacific chairman Christopher Pratt said earlier he hoped the new seats could be rolled out by next year to capture a clientele looking to trade down from business class, and those who don't want to be in economy class, because despite a return in passenger traffic and prices for business class, passenger yield had yet to return to 2007 levels.

At a ceremony to mark the reception at Boeing's delivery centre in Seattle last month of a 777-300ER - the third aircraft fitted with Cathay's latest business-class seats - the airline's chief executive, John Slosar, said four seats were cut to make the new product more spacious. But he said the sacrifice in space would be rewarded by a higher loading.

The reviews I have read say that the new seats don’t provide any extra space, but just a different configuration.  However, the SCMP reporter has no doubts:

A test of the new business class cabin by a South China Morning Post reporter confirmed that it is not only wider but also more comfortable than the cabin it will replace, particularly its sleeping configuration, which is more spacious.

The new seats enable passengers to look out of their windows without the need to turn their heads at a right angle, and the two middle seats are angled towards each other, allowing travelling couples to be closer. Passengers wanting more privacy can use a cabin door equipped with a mirror as a partition.

Attention is also paid to finer details.  The new seats have a recess at their base which may be used as a step to help smaller air hostesses and passengers to load and unload luggage from their overhead racks. Small lights next to the recess are intended to alert cabin crew during take-off and landing that the seats have not been fully restored to the upright position.

OK, the steps are a clever feature, but where's the objectivity?

The long way round

I’m not keen on the Dragonair flight from Hong Kong to Bangalore, but I can’t help feeling that it may have some advantages over this option from Jet Airways:

I’m thinking that it doesn’t take 1 hour from Chicago to Delhi.  So that would be the next day.  Surely there’s a faster way from Hong Kong to Delhi…