English? Only if you can read Chinese

This is the UPS Hong Kong website.  It’s in Chinese, which is fair enough, but surely there must be an English version.  Common sense would dictate that there would be a button marked ‘Language’or ‘Eng’or something similar.  In English.  Nope, can’t see that anywhere.

Yes there is an English version, but you have to be able to read Chinese to find it.  Click on the correct button and a little drop-down appears and gives you the choice of Chinese or English:

Well, better late that never, I suppose.  Not a flight from Shanghai to Hong Kong, but a story in the South China Morning Post about the frequent delays on that route (subscription required):

Flights to and from mainland airports have been delayed for up to eight hours. About four out of every 10 Dragonair flights are taking off late and the average delay for flights by all airlines has climbed to 48 minutes. Most are made to wait on the tarmac with passengers on board before being given clearance for take-off.

The Hong Kong Civil Aviation Department confirmed that delays caused by "flow control" issues are on the rise. The number of flights affected between April and June was more than four times the number in the corresponding period last year. It has raised the matter with mainland aviation authorities.

Pilots say police had to be called to board a grounded flight in Hong Kong to deal with one irate passenger. They warn morale is slumping among cabin crew who bear the brunt of passengers' ire.

Anyone who has flown that route (or almost any other between Hong Kong and China) will be aware of the serious delays. The SCMP even published a letter about it a few weeks ago, but it has taken them a long time to get round to writing a story about it. 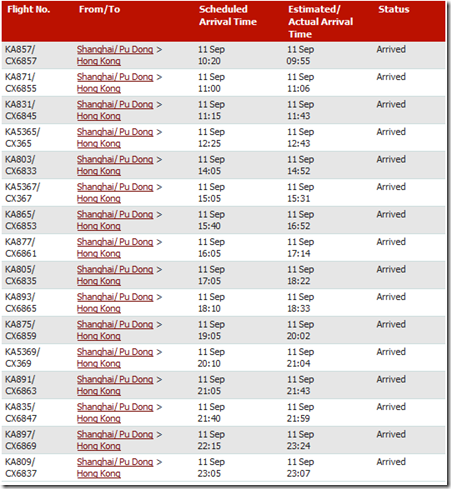 Flight statistics circulated to pilots show that around four out of 10 Dragonair flights took off more than 15 minutes late over a two-week period last month. A management report said military exercises caused the closure of some airways, adding to the already heavy backlog of flights due to "flow control" and causing severe disruption.

Pilots say passenger anger is being stoked by the need for planes to be fully boarded with doors closed before clearance for take-off can be requested. Only then are cockpit crew informed of hold-ups. Almost invariably, they are told the reason for the delay is "undetermined".

Pilots now seem to be much more outspoken, and will tell passengers about the frustration they feel about flights being delayed by 2-3 hours without any proper explanation.

A Dragonair spokesman said: "Dragonair is aware of the problems over delays on flights to and from China. For most days in general, delays range from 15 to 20, 30 minutes. There could be some bad days as a result of bad weather and flow control issues, which happen roughly two to three times a month [and] in which delays could be to up to six, seven or eight hours.

"We are aware that IATA [the International Air Transport Association], on behalf of the industry, is working actively on this matter with the relevant Chinese authorities.

"The problem is one of airspace capacity and affects all carriers who operate to China."

Friday’s Dragonair flights from Shanghai to Hong Kong are shown right, and nearly half (7 out of 16) were around an hour late landing in Hong Kong, and two more were about 45 minutes late.  Remember that it should take 2 hours flying time, but is scheduled for around 2 hours 40 minutes, so a flight that is officially one hour late has taken 3 hours 40 minutes.

Admittedly, Friday didn’t see any of the really long delays that are common on this route, but landing at 11.30 pm rather than 10.15 is still very frustrating.

A couple of weeks ago there was an advert in the SCMP for ESPN HD and ESPN News, but with no mention of Now TV.  Which seemed a bit odd.

Today’s SCMP explains that the contract between PCCW’s Now TV and ESPN Star Sports expired last Tuesday, and so far there is no deal in place for a renewal.  Which means that the channels could soon be available on Cable TV (ESPN used to be on Cable TV, but Star Sports was a free-to-air channel at the time), or even disappear completely - as the SCMP rather melodramatically speculates:

The prospect of blank television screens is looming large for Hong Kong sports fans, as protracted contract talks between ESPN Star Sports and PCCW (SEHK: 0008) go down to the wire.

An exclusive six-year deal between the two companies to broadcast some of the world's biggest sporting events ended on Wednesday, and if a deal isn't struck coverage will end this week. The sides suspended cancellation of programmes to undertake 11th-hour discussions to broker a new agreement.

"This has been dragged out over the past few weeks," an executive with detailed knowledge of the negotiations said. "The talks have all but collapsed. It's been ongoing for weeks, but the situation is in limbo and there's been no progress. It was public knowledge that they had a six-year exclusive deal which has finished, but now they're in these talks and they're just not reaching an agreement. There are some frantic negotiations now taking place."

If an agreement is not found it will mean a viewing drought for many armchair sports fans.

ESPN Star Sports provides a range of sports from live coverage of Formula One, cricket internationals, golf majors and tennis grand slams, to top American sports like the NBA Finals, Baseball's World Series and the Super Bowl in American football.

ESPN Star Sports would have to find another carrier for its channels to be shown in the city. If the deal with PCCW collapses, it would have to strike a deal with Cable TV or Hong Kong Broadband Network.

"At this stage our official comment is that we are committed to work in the best interest of sports fans in Hong Kong and we continue to work closely with PCCW [towards a deal]," ESPN Star Sports said.

PCCW was also tight-lipped, as the negotiations continued.

However, the executive insider said discussions were on their last legs. "It could easily happen that they're not going to reach an agreement and that the partnership with PCCW will end," the executive said.

"ESPN Star Sports and Star Cricket channels would no longer exist, along with other new sports packages they had hoped to open to the Hong Kong market - some of these have already been promoted in the region, like ESPN HD, ESPN 24-hour News, and ESPN Player."

This year has been a tough one for Hong Kong fans, especially as, in November, PCCW's Now TV lost the rights to screen live English Premier League matches to Cable TV, leaving many soccer fans in the lurch.

Industry insiders said Cable TV paid more than US$200 million to obtain the rights. It had lost them to Now TV in 2007 when the broadband-television operator paid US$180 million for a three-year deal.

Cable TV winning the rights back prompted an angry response from viewers and bar owners faced with having to sign contracts with both television operators.

Now TV had to reduce the price of their “Now Sports megapack” when they lost the rights to the EPL, so what will they do if they also lose ESPN & Star Sports?