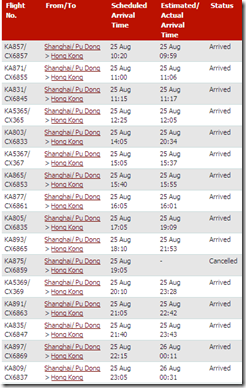 Dragonair’s main USP is that it’s the Hong Kong airline that flies to China.  Which is also its main problem.  The table on the right is from the Dragonair website, and shows the scheduled and actual arrival times of flights from Shanghai to Hong Kong on one day (Wednesday 25 August).

The day starts off so well, with flights leaving on time and arriving on time (or early, which is possible because they schedule the flight at around 2hrs 40 minutes when it really only takes 2 hours).  CX365 and KA857 both managed to arrive 20 minutes earlier than scheduled.

The next three flights to depart were also quite good (one was four minutes early, the other two arrived less than half an hour late).

Ah, but what about KA803, you may ask.  This was over six hours late leaving, and six and a half hours late landing.  Which must mean that it spent nearly an hour after leaving the gate taxiing around before it actually took off.   Just what you need after a six hour wait (though I assume that most of the passengers were switched to earlier flights).

Things didn’t get any better after that.  Out of the eight flights scheduled to depart after 2pm, the "best" performances are from two that <only> had a delay of 90 minutes, and the worst a staggering 3 hours and 45 minutes late arriving.  Then there’s a Cathay flight weighing in with a 3 hour 20 minutes delay - and there’s quite a big difference between landing at 8.10pm and 11.30pm as your evening completely disappears.

Of course it’s not all Dragonair’s fault, but rather a result of the vast number of flights down the east coast of China - from Beijing, Shanghai Pudong and Honqqiao, Nanjing, Hangzhou (and a few more besides) down to the Pearl River delta (Hong Kong, Guangzhou, Shenzen and Macau), and don’t lets forget the flights between Shanghai and Beijing, and even Hong Kong to Guangzhou for people who really hate trains.

So much football, lah

It doesn't seem that long ago that we only got one EPL game live on Saturday night.  Then it became two of the 3pm kick-offs, and then (3 years ago) every single game.

Perhaps even more amazing is that we now get up to 3 live games on Saturday from the Championship (the second tier of English football) courtesy of Goal TV, which has recently been added to the Now Sports package.

Goal TV also has selected programmes from the club channels of Chelsea, Liverpool, Real Madrid and Barcelona, including full matches (but recorded rather than live).

MUTV (Manchester United’s channel) is no longer available through Goal TV but has become a standalone channel on Now TV - for which you have to pay extra.  They seem to show their EPL games a few hours after they have finished.

So what is available?

As ever, updates and corrections are very welcome.

So nice to study your perfect weblog on the spare time. Your write-up brings me different type of feeling about the literature.

You have a good understanding of China! Deeply the Chinese people I admire you! Thank you for your love! We will be better in China

You have a good understanding of China! Deeply the Chinese people I admire you! Thank you for your love! We will be better in China