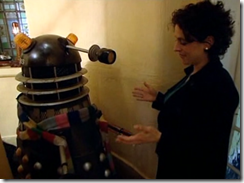 Just watching The Hotel Inspector on BBC Lifestyle, and I was puzzling over what had been blurred out.   BBC Lifestyle has been known to blur out all manner of fairly innocuous things lest they offend sensitive viewers.

Turns out that it was a dalek (unblurred image shown right)…

It did seem odd that there were numerous references in the programme to the dalek in the entrance hall, that somehow we never saw it, and apparently it was for copyright reasons rather than for reasons of decency.

Thanks, by the way, to the person at Now TV who finally figured out that it is now being broadcast in widescreen and made the necessary changes so that we didn’t have wide bands at the top and bottom and a squashed picture.  You might want to do the same thing on BBC Knowledge.