National Geographic trying to save paper

Save time and money, it says. 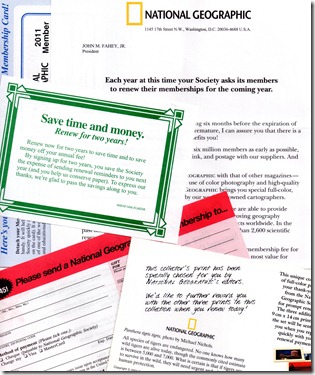 By signing up for two years, you save the Society the expense of sending renewal reminders to you next year (and you help us conserve paper)

Well, if you want to save paper maybe you could resist the temptation to stuff the envelope with all these different bits of paper.  That I really don’t need.

When Prudential’s ill-fated attempt to buy AIA was first announced, the SCMP was very slow getting on to the story.  Today (Thursday) they even seem to have more coverage than the FT (or at least its Asian edition), so I think I wasted HK$28 on the pink 'un.  This is one of the SCMP’s three stories:

The champagne corks were popping at American International Assurance offices in Hong Kong yesterday after the collapse of the deal with British insurer Prudential.

AIA staff and agents feel more secure in their jobs and are hoping parent American International Group will revive the listing of the company in Hong Kong in the third or fourth quarter. Insiders at both AIG and AIA said a separate listing of AIA would give them a better chance of keeping their jobs and receiving share options.

"I am a shareholder of Prudential and was prepared to vote against the deal," said one AIA staff member. "This is the time to celebrate and we plan to have a drink as our lives can get back to normal now."

The staff member, who did not want to be named, said many AIA staff and agents had felt uncertain since Prudential's offer in March of US$35.5 billion to take over AIA. Their main concerns were job security and change of management style.

"AIA and Prudential have many differences in their history, background and management style," the staff member said. "If the merger had proceeded, many staff and agents might have faced lay-offs."

Prudential would lay off agents from AIA?  What would be the point of that?  Isn’t it the sales force that they wanted to acquire?

Another person familiar with AIG and AIA said the management and agents have never been happy with the idea of the merger with Prudential. "Management feared a merger would lead to the loss of their jobs while the agents worried about a change of house rules and sales practices," the person said. "For senior management and some agents, many of them hoped the listing of AIA would give them share options."

Well, yes, that seems closer to the truth.

Well, well.  Common sense prevails (for once) and a huge and stupid acquisition is abandoned.

Prudential has bowed to shareholder pressure and formally abandoned its attempt to take over the Asian insurer AIA, leaving its management team with a £450m bill as they fight for their futures.

In a statement released overnight, the Pru said it is terminating its negotiations with AIA, after parent company AIG refused to accept a reduced offer of $30.375bn (£24bn) against the original terms of $35.5bn.

Pru chief executive Tidjane Thiam, who is under pressure following the deal's failure, insisted that he was right to target expansion opportunities in the far east.

"We entered into this potential transaction from a position of strength in Asia and we view the region as offering excellent growth opportunities for Prudential," he said.

"We listened carefully to shareholders over the price and initiated a renegotiation of the terms with AIG. Unfortunately, it has not been possible to reach agreement so we feel it is in the best interest of our shareholders not to pursue this opportunity," said McGrath.

It was never an “excellent opportunity”.  If Prudential have money to invest in Asia they should be using it to grow their own business, or buying much smaller companies that they could absorb.

The Pru must now pay a break fee of £152.5m to AIA for walking away from the deal, plus £81m in fees to City institutions. The rest of the £450m was incurred in legal and advisory fees, plus the estimated cost of various derivatives contracts which were taken out to hedge the value of the pound against the dollar. These contracts were needed because the Pru planned to raise £14.5bn in a record-breaking rights issue, but pay $23bn in cash. The pound had fluctuated against the dollar in the months since the bid was launched, and some analysts believe this may actually have generated profits, reducing the total cost of the failed bid.

Leading City investors warned last night that both McGrath and Thiam face calls to step down. Robin Geffen, chief investment officer of the fund manager Neptune, said the pair were guilty of attempting to buy "a large Asian company, at a very high price, with a very unclear strategy". James Chappell of Olivetree Securities questioned whether investors still had faith in Thiam, who became chief executive last October.

How can investors have any confidence in Thiam?  Surely he has to go.