Prudential still seem to be struggling with the takeover of AIA.  They had a run-in with the Financial Services Authority in the UK, but that has been resolved, and now they have published the prospectus. 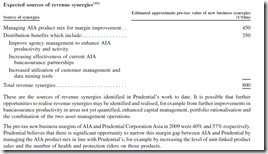 They claim that they can deliver $800m of revenue improvements by (amongst other things) making AIA’s agents more productive.  They have figures to back this up – from last year (2009).  Hands up anyone who can think of anything that might have adversely affected AIA sales last year.  Yes, that’s right, AIG had come close to collapse and been rescued by the US government.  So this is not a meaningful comparison, as has been pointed out:

But Prudential stood by its claims that it would deliver higher productivity. It said that based on 2009 figures, its agents were more productive compared with AIA in nine out of 10 regional markets, with AIA holding the upper hand in Thailand alone.

Yes, 2009 figures.  We all know why AIA struggled in 2009, and why AIA’s agents are already becoming more productive. This trend is confirmed by the figures for the first three months of this year, but of course Prudential use them to argue that they have got a bargain, and conveniently ignore the implied productivity growth.

Barry Stowe of Prudential Asia is quoted as saying that Prudential can “restore AIA to its former greatness” by offering its agents more and better products.  Yeah, right.  So why is AIA much bigger and more successful than Prudential in Hong Kong and much of the rest of Asia?  Why indeed does Prudential want to buy it?  Perhaps Mr Stowe should think about that before commenting.

I know nothing about the “products” sold by AIA or Prudential, but I can guarantee that the management of both companies know each other’s products very well indeed, and if Prudential have a successful product then AIA can easily create something very similar.  These are not physical products that can be patented, and they are not even intellectual property that can be copyrighted.  So it’s highly unlikely that Prudential’s “superior products” are going to help AIA to make more money.

This brings us back to one of the fundamental problems with this deal.  The prospectus states that:

…the Acquisition is primarily a growth focused transaction, although cost synergies will also be sought.   Prudential intends that the Enlarged Group will use both the Prudential and AIA Group brands, maintain separate agency forces and strengthen both agency forces by the sharing of best practices.

So you have to question whether Barry Stowe is wise to make all this noise.  It may be possible to “strengthen both agency forces” but not if you drive AIA agents away by telling them that Prudential is so much better than AIA (especially when the evidence suggests otherwise).

Is Prudential paying less than AIA is really worth?  Because that is the only reason Prudential shareholders should approve the deal.