Percy Jackson and the Olympians: The Lightning Thief

It’s easy to imagine the thought processes of the studio bosses.  Here’s a book about a 12 year old with a difficult home life and some special powers…so let’s sign up that Chris Columbus fellow who directed the first two Harry Potter films.

So yes, the the film of (take a deep breath) Percy Jackson and the Olympians: The Lightning Thief comes across as a rip-off of Harry Potter.  But don’t assume that the books are the same. Rick Riordan deserves credit for using Greek mythology as the basis for his tales, and with considerably more subtly and wit than Mr Columbus can manage.

In the book, we learn early on that Percy’s father is absent, and there hints about what the real story might be.  In the opening shot of the film, Poseidon strides through the water and on to the land.  Then it’s off to the top of the Empire State building for a quite chat with Zeus, who accuses Poseidon's son of being the lightning thief.  So that’s the plot all sorted out then – and yes, there’s plenty more clunky exposition to come over the next 2 hours.

Bizarrely, Percy Jackson is 16 years old in the film, whereas he was 12 in the first book.  It seems that the money men may have been worried that his age would frighten off adults, so he has consciously been made older and Grover Underwood (his best friend) seems inappropriately leery for what is supposed to be a kids movie.

The lead actors are unknown, but there are plenty of star names - Steve Coogan, Uma Thurman, Sean Bean and Pierce Brosnan (amongst others), and the first two are fine but Brosnan really needs to stop trying to do comedy.

Is it really so difficult to turn childrens’ books into movies?  Prince Caspian was stupid, the Golden Compass was poor, and now this. 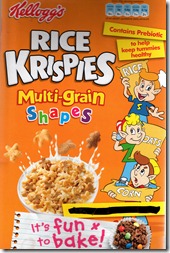 About 18 months ago, the government introduced new legislation about nutritional labelling.  There was a lot of fuss made about all the products that would disappear from Hong Kong supermarkets because they claimed to be low in fat or whatever.

At the time, I suggested that there was an easy solution:

Surely it must be possible to use a sticker to obscure the claims that are not allowed?  Given that imported products already have locally added labels of one sort of another, this doesn't sound like too much of a problem.

Well, here we are in 2010 - and guess what?  Yes, it seems that AS Watson (owners of Park’n’Shop) have invested in some black marker pens to stop us reading that Rice Krispies Multi-Grain Shapes are high in calcium, vitamins and iron.

I’d love to know how many products have totally disappeared from supermarket shelves as a result of this new legislation.  I’m guessing that it is hardly any.  Products randomly appear and disappear from my local Park’n’Shop so it would be hard to tell if any have gone because of these new rules – but I suspect the big retailers were just crying wolf again.

Avatar is no Toy Story

It is said that James Cameron spent about ten years waiting for the technology he needed to make Avatar.  You’d think that he might have spent a tiny fraction of that time going to the cinema to watch a Pixar movie or two, just to see how computer animation can be combined with engaging characters and an interesting plot.

Yes, sure, there are parts of Avatar that are visually stunning, but that isn’t enough to compensate for the wafer-thin plot and the one-dimensional characters.  Oh, and it’s at least an hour too long.  And was unobtanium really the best name he could conjure up for the stuff that caused all the trouble?

Skeletons in the sliding centre

I have no interest in the Winter Olympics, but this headline from the BBC caught my attention:

Britain's Amy Williams sets a new track record to lead the women's skeleton after the first of four runs at the Whistler Sliding Centre.

They have an event called skeleton?  There’s a venue called the “Sliding Centre”?

Be careful what you wish for

Interesting article in The Independent (When the locals bought their local) about a pub that has been bought by its customers.

Ten years ago this corner of northern Salford boasted eight pubs within walking distance of the Star. One by one they've closed their doors.

Before Christmas the Star nearly went the same way. Robinsons, the brewery, decided to sell up and gave three weeks' notice of closure. But the Star's locals formed a co-op and bought their drinking hole for £80,000.

This is not an isolated example:

According to the British Beer and Pub Association 39 pubs are closing every week. A new report from Co-Operatives UK estimates that 2,700 pubs will collapse in the next 12 months, compared to 2006 when there were just 316 net closures.

Any landlord can give you a litany of reasons for why the industry is so tough; from spiralling energy costs to tax hikes and the smoking ban. But two things get them most animated: the "beer tie", which forces half of the country's pubs to buy drinks from a particular brewer (often at vastly inflated prices), and the multinational companies known as "Pub Cos". Half of the UK's pubs are owned by Pub Cos, the two biggest owning a quarter.

The dominance of the Pub Cos can be traced to 1989 when the Thatcher government tried to inject competition into the pub industry. Breweries with more than 2,000 pubs were ordered to sell off their excess, and offer a "guest beer". The cleverer breweries worked out that there was nothing to stop any number being owned by a company that didn't make beer. So they set up property companies to own vast numbers of pubs and force licensees to buy off a brewer.

I know hindsight is a wonderful thing, but I remember wondering at the time whether one or more of the large brewers might decide that there was more money to be made in running pubs, and sell off their brewery business.   As they did.  The Guardian had a good article about this some time ago (Calling time) describing the way these huge “pub companies”operate:

'We buy beer cheap'" - from the big four breweries, Scottish and Newcastle (now owned by Heineken); Coors; Carlsberg; and Inbev (better known as Stella Artois) - "'and sell it dear, and that's our profit.'" There isn't much space, in this model, for a publican to make money.

The Supply of Beer (Tied Estate) Order 1989 and The Supply of Beer (Loan Ties, Licensed Premises and Wholesale Prices) Order 1989 were intended to increase competition in brewing, wholesaling and retailing, by ensuring that no brewer could own more than 2,000 pubs. However, the consequence of this legislation was the creation of stand-alone pub companies, the pubcos, to whom brewers sold their pubs. The pubcos were exempt from the beer order legislation, because they did not brew the beer themselves.

So the government legislation totally failed to achieve what was originally intended.  In fact it has made things worse by moving control from the big brewers to the shadowy pub companies that are only interested in profits.  Smaller breweries find it just as difficult to sell their products into local pubs, and many landlords struggle to make a living.  It’s somewhat ironic that a Conservative government should have tried to interfere in the market in this way, but hardly surprising that it had such unfortunate consequences.