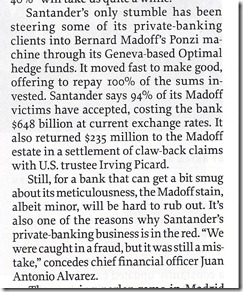 Time magazine has a story about Santander: The Most Boring Bank in the World.  Except that it seems not to be so boring:

Santander's only stumble has been steering some of its private-banking clients into Bernard Madoff's Ponzi machine through its Geneva-based Optimal hedge funds. It moved fast to make good, offering to repay 100% of the sums invested. Santander says 94% of its Madoff victims have accepted, costing the bank $648 billion at current exchange rates. It also returned $235 million to the Madoff estate in a settlement of claw-back claims with U.S. trustee Irving Picard.

Still, for a bank that can get a bit smug about its meticulousness, the Madoff stain, albeit minor, will be hard to rub out. It's also one of the reasons why Santander's private-banking business is in the red. "We were caught in a fraud, but it was still a mistake," concedes chief financial officer Juan Antonio Alvarez.

$648bn is a really big mistake.  Talking of mistakes, I wonder if possibly the figure should be $648 million.  Just a thought.