When England won the Ashes 4 years ago it seemed like an amazing achievement after so many years of disappointment (OK then, humiliation), but doing it for the second time doesn't seem quite so exciting.

Maybe it's because it has seemed like a contest between the teams ranked 4th and 5th in the world (which is how they stand after this series).  Of course, it's always good to beat Australia at any sport, but don't they normally put up a better fight than this? 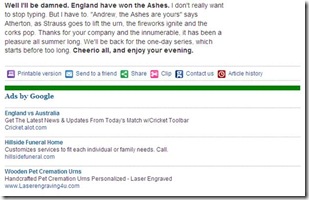 Or is it because things could have turned out very differently.

Or is it just that I have missed out on the live TV coverage and all the media hype in England?

There really wasn't much media hype in the UK either before or after the Ashes win... I'm not much of a sports fan but I normally vaguely know what's going on. I heard about the win, but can't say anybody has really sounded very excited about it all!