Chairmen will discuss a plan put forward by Bolton's Phil Gartside to have a two division Premier League including Celtic and Rangers.

click on the link and it takes you to this page: 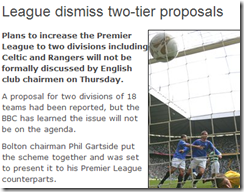 Plans to increase the Premier League to two divisions including Celtic and Rangers will not be formally discussed by English club chairmen on Thursday.

A proposal for two divisions of 18 teams had been reported, but the BBC has learned the issue will not be on the agenda.

Bolton chairman Phil Gartside put the scheme together and was set to present it to his Premier League counterparts.