At first I thought this was a joke.  Why would someone who claimed to believe that the Internet is the future (on RTHK) publish a printed magazine?

However, having finally found copies of the third issue of NTSCMP in a branch of Dymocks (quite a lot of copies, actually), I can confirm that it does really exist, and the layout is every bit as awful as the website.

Spike was a good magazine written by professional journalists, and that failed, so it's really hard to see how NTSCMP can survive - and that branch of Dymocks still seems to have the same number of copies on the shelf after about a month, so the signs are not good.

English - if you can read Chinese

Paypal have set up a Hong Kong site.  Hurrah - there's an English version.  However, you have to wonder about the common sense of the people who set it up, because this is the screen header:

Well-designed multi-lingual sites have a button saying 'English'.  This one doesn't.

However, if you can recognize any Chinese characters you might try clicking that button on the second row:

and when you click it it duly expands to give you a menu:

oday's SCMP has a league table that "does not include [the] late game".  Well, actually, it doesn't include any of yesterday's games. 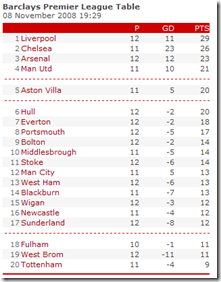 Still, at least the results are correct...

Letter of the week

A few days ago, Ken Livingstone made the fairly obvious observation that building new roads is only ever a short-term solution, and said that the proposed Wan Chai-Central would be a "complete waste of time"

Today, there is a letter in the SCMP on this subject:

How inappropriate for a progressive society like Hong Kong to listen to former London mayor Ken Livingstone on matters of city transport.

London's so-called transport planning under "Red Ken" created more hot spots and suburban congestion, accidents and commuter frustration as the disastrous consequences of his congestion charges became apparent. It is nothing more than a tax-raising scheme and has no place in a modern city.

The Central-Wan Chai Bypass is akin to the Lantau airport - stay with the old and stagnate, embrace forward thinking and progress - it is a no brainer.

Who better to give advice on road construction in Hong Kong that someone who lives in Glasgow?  For anyone not familiar with the geography of the UK, it's a city several hundred miles north of London.  Which doesn't have the congestion charge.

This is what Ken Livingstone said:

"In any city as densely populated as London, New York or Hong Kong, there's a potential to double the road system and it will fill up," he said. "Transport planners have known since 1938 that however many roads you build - they will fill up, usually within 18 months or two years ... If you take the [vehicle] capacity out, the number of people driving goes down; if you put it up, the number of people driving goes up.

"When you look at a city like Hong Kong, especially when you've 100 per cent of the roads you need, it's about using them more sensibly."

But apparently that's not a forward-thinking or progressive attitude.  Oh no.  Build more roads, reclaim more of the harbour, and everything will be much better.