When I first saw the books, I thought that it was simply a bit of clever marketing, but it turns out that they have updated the Famous Five for the new millenium with four new characters (Jo, Max, Allie & Dylan) who are supposed to be the children of George, Julian, Dick & Anne.  That makes no sense, because the first book was published in 1942, at which point Julian was 12, Dick & George were 11, and Anne was 10.  Which would make it rather unlikely that their children would be teenagers in 2008.  Admittedly they were still the same age 21 years later when Enid Blyton published the 21st and final book in the series, but even so, it doesn't seem quite right.

Even better, we are asked to believe that tomboy George went off to the Himalayas, met an Indian called Raavi, and they had a daughter called Jyoti  (but known as Jo), and that Annie moved to California after University and is now a successful art dealer, with a daughter called Allie.  Which takes care of the whole multicultural thing - clearly they wouldn't have got away with having four white, English, middle-class children.  You'll be relieved to hear that the dog is still called Timmy, and that no-one has bothered to give him a back story.

OK, actually these are not really new books.  Instead they are novelizations of a new Disney Channel TV series made by the company who now own the rights to Enid Blyton's name and all her characters.  So I guess they can do whatever they want.

High School Musical 3 opened in Hong Kong on Friday.  Sadly, I wasn't able to get to the cinema myself, but I am told that it's doing good business.

Sunday's SCMP re-printed a Guardian article (Shake your money maker) about the phenomenon that is Disney Channel.  What's interesting about the channel is that rather than just endlessly re-running classic Disney movies (which they also do), they also have their own roster of artists and a corresponding array of original material, including Hannah Montana, Camp Rock and, of course, High School Musical.  Most of it seems like rubbish to me but your average 11 year old thinks differently:

While the rest of the industry gave up on the under-14 market to target less challenging, less volatile areas, Disney seized its opportunity. "Clearly, the paradigm has changed. What has really accelerated in the last three or four years is that the Disney Channel has become an incredible content creation machine for the rest of the Walt Disney company. It is a fundamental shift in how business is done and how television is perceived within the company," says Marsh.

[..] Television has become the new radio. Our audience, the six- to 12-year-old demographic, is acutely attuned to the music world. By and large, the record companies dismissed them as too poor, too uninterested, too parochial. We figured out a model that feels like music just for them, that somebody thought through and delivered to the place that is most natural for them to consume it."

Turn on Disney Channel any time of the day or night and you're never more than a few minutes away from High School Musical (Sing-along, Dance-along, Hoop-along), Hannah Montana, Camp Rock, or the Jonas Brothers.  And it's paying-off:

These guys know exactly what they are doing.

The long-established electrical chain Tai Lin recently closed down, apparently a victim of the current financial crisis.  I've only bought one item there and I had to take it back again and get a refund, so I suppose that doesn't really count.  Their stores always seemed much less crowded than Fortress and Broadway.  Ah, yes, now it all makes sense.

Other retail chains seem to be reducing the size of their stores.  Not the number, but the size.  It's not a new phenomenon - I remember when Marks & Spencer had huge two-level stores in Festival Walk and Plaza Hollywood, both of which were cut back to one floor.  Toys R Us have similarly reduced the size of several of their stores, including the ones in Festival Walk and New Town Plaza.

Now it's happening again - last time I went to the IKEA store in Sha Tin I noticed that there was a lot of renovation going on, but only realized at the end of my five-mile walk that they appear to have closed the upper floor altogether.  Meanwhile, over in New Town Plaza, both the bookshops (Popular and Commercial Press) have been slimmed down by roughly a third.  Presumably there will be no shortage of retailers happy to take over the space they have vacated, and so everyone's a winner.   Especially shopfitters.

Paul Pong, the SCMP's brilliant stock picker, has come up with a new prediction:

Though the global economy looks gloomy, the stock market may rebound first. I predict the HSI will rebound to 25,000 next year, though that may sound unrealistic given the current sentiments.

Unrealistic?  Of course not.  With Paul Pong's record I'm sure it must be true!

Watching Cable TV news tonight is franky a bizarre experience.  Gordon Brown seems to be the hero of the day, and thus we get to see the highlights of his political life, including the time his best mate Tony Blair bought him an ice cream (I guess you had to be there...).

Just a few weeks ago the very same Gordon Brown was the most unpopular prime minister in the history of prime ministers (well, at least since Tony Blair, or maybe John Major), so this is rather an unexpected development.  I'm sure he can find plenty of ways to make himself unpopular again before the next election, so I hope he enjoys it whilst it lasts.

The British plan will result in the government owning about 60% of RBS and 40% of the merged Lloyds TSB and HBOS:

BBC business editor Robert Peston said the announcement would "count as perhaps the most extraordinary day in British banking history" and was "an absolute humiliation" for the banks.

As part of the banks' announcements:

Ho hum.  The curse of ABN Amro strikes again - Fortis had to be rescued last week, and now it's RBS.  How sad it is to see bankers humiliated...

Surely Braun are having a laugh when they claim to offer a 2 year guarantee on their Oral B battery-operated toothbrushes .  In my experience they become hopelessly unreliable after only a few months of usage.  Yes, you can fiddle around with them and prolong their life for a few more weeks, but after that you might as well throw them away.

I console myself with the fact that if you subtract the cost of the brushhead and the two batteries, the tube of plastic and the motor don't really cost that much.

One day I'll keep the receipt and try to return one of them when it stops working after 8 months.  No, I won't, will I?  I'd probably have to return it to a Service Centre in Mong Kok or Kowloon Bay and queue up to take it back, and then go back and queue up again to collect it again when they've repaired it.  Too much trouble, lah. 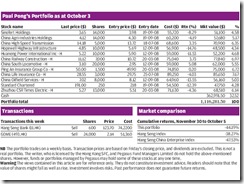 The Sunday Morning Post has been running a column on the back page that was supposed to offer investment advice.  It's written by Paul Pong of Pegasus Fund Managers, and features a hypothetical portfolio of Hong Kong and China equities.

Today they announced that the column is to cease because "the amount of trading in the portfolio has increased substantially and this could create conflicts of interest with his obligations as a professional fund manager."

So, nothing to do with the fact that the value of the portfolio is down 44.19% in the ten months that the column has been running?

I know nothing about typhoons, so can anyone explain why the Observatory think that this one is heading for Hong Kong?  Surely it could end up anywhere? 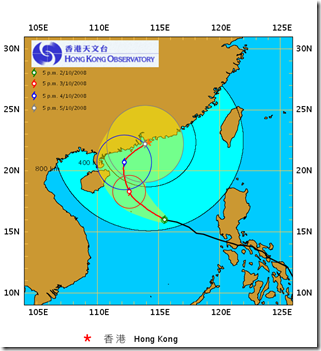