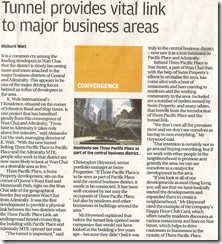 I was rather amused by this story in the SCMP yesterday.  As you can probably see, the headline is "Tunnel provides vital link to major business areas."  It's in a slim supplement about the 'New Face of Wan Chai'.  This includes Three Pacific Place - which rather cleverly isn't actually in Pacific Place itself.  So the developer built an underground walkway to connect it up.

It was the first development to provide a physical link between the two districts when the Three Pacific Place Link, an underground tunnel connecting the building with Pacific Place and Admiralty MTR, opened last year. 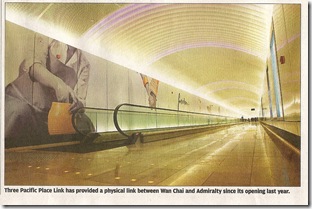 There's even a picture of the tunnel, showing how busy it is.  The picture caption hammers home the point:

"Three Pacific Place Link has provided a physical link between Wan Chai and Admiralty since its opening last year".

And there I was thinking that you could walk from Wan Chai to Pacific Place along the, er, road.  Or take one of those tram things that go along Queensway and Queens Road East.

Which presumably is what people actually do, based upon the number of pedestrians shown in the photograph of this marvellous underground physical link.

I live near Three Pacific Place and work in the Lippo Centre, and I can count on one hand the number of times I have used the tunnel. Usually when there was torrential rain.

The only people that I think benefit from it are those that commute via MTR to Three Pacific Place. I think the moving walkway changes direction to take them there and back.

By the way, the tram goes along Johnston Road, not Queen's Road East.