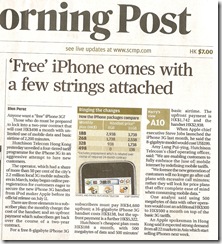 When the iPhone 3G was announced a few weeks ago, the SCMP gave it a lot of coverage, presumably because this was going to be the first opportunity for gadget-hungry Hong Kong people to get their hands on the over-hyped device.

Well, apart from the large quantity that have been sold on the 'grey market'

Much was made of the $199 price for the device in the States, and the implication was that a similar price would apply worldwide.  Very cheap, lah.

However, it was hard to see why this justified blanket news coverage when it is simply a mobile phone.

Now Hutchison have announced the prices and the tarrif plans that will apply to the iPhone.

And guess what?  Yes it is on the front page of the main section of the SCMP as the second lead story.

Yes, that's right - a mobile phone tarrif is the second lead story in the SCMP.

Last week, Cathay Pacific was fined US$60 million, having pleaded guilty to price fixing on cargo freight charges into and out of the USA.

So what did SCMP do? Put the story on the front page? No. Front page of the city section? No. OK, how about the front page of the business section? No, not even there. For reasons best known to themselves, the editors practically buried the story and only had a a short agency report on page 3 of the business section. All the news that fits. . . way to go boys.

I can't wait for the new iPhone. This is the first iPhone with HSDPA, so it's not like the parallel imports you see today.

Also, I predict this will easily become the Number One phone in Hong Kong, especially when the other carriers get access.

I missed that Cathay story. I did see lots of Cathy adverts in the SCMP, though.

To say that the SCMP has an air of duplicity and predictability would be the understatement of the year. Verve it has not.

I am surprised to hear that an article about iPhone and mobile phone service was on the front page of SCMP. Perhaps nothing else more important and earth shattering (perceived by the editors) happened that day? I guess it's a mystery how some newspaper editors select front page stories.

Well it's not just a mobile phone.
It's a GPS, iPod, phone, email device, camera, TV and video player in one device.