The Palazzo - the view from Piazza Michelangiolo 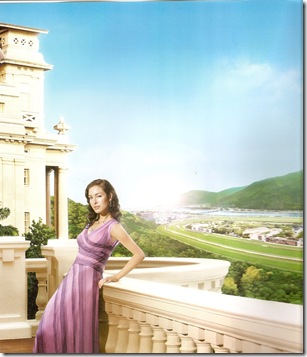 Friday's SCMP came with a glossy magazine, and yes there is an advert for The Palazzo (see right).

Presumably this is supposed to show the view from what their website describes as 'Piazza Michelangaiolo' (in case you're wondering who he might be, I think he was a renaissance painter during the week and a Formula One racing driver at the weekend).

And there's the racecourse in the background, not as close as in some of the pictures, but once again surrounded by green stuff.

Luckily, the imaginary shrubbery manages to obscure stuff that doesn't fit in with the developer's concept of Fo Tan as a rural idyll - such as the highway and the spectator stand at the racecourse.

Rays of sunlight also seem to block the view of Ma On Shan in the distance, which is a remarkable stroke of luck.

The weirdest thing is that a new building has appeared at the far end of the racecourse.   It's a modern but fairly low-rise building, and presumably it is a nod to the fact that racecourses don't generally exist without development of one sort or another.

Luckily, dear potential purchaser of an apartment in The Palazzo, those buildings are quite a long way from your lovely new home.