Home Archives Subscribe
JK Rowling (without beard)
Did anyone think this through?

The Palazzo and the rugby stadium 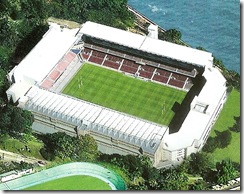 Today's SCMP comes with a giant poster of The Palazzo, complete with the ridiculous claim that it benefits from the superb facilities of the Olympic Equestrian Arena.  That's the temporary arena that the developers portray as a small rugby league stadium (see right), and which will be demolished before anyone moves into The Palazzo.

Meanwhile, someone has kindly provided a link for the overblown TV ad for The Palazzo (on You Tube of course).

Personally, I find it amusing rather than annoying.  At least the ad (like the website) looks good, and is well-done, unlike so many of the adverts we have to suffer on Hong Kong TV.

According to yesterday's SCMP, they have managed to sell the first batch of apartments, so presumably they'll be happy with their efforts in attempting to deceive the public.

Meanwhile, one of the largest property agents in this city is wilfully undermining some of the good work done by the developers, by circulating photographs of the actual development, which shows that Ma On Shan may be a  little closer than it appears in the artist's impression, that the opposite bank of the Shing Mun river is more developed, and that the sewage treatment works are not a large area of green open space.

The same leaflet also shows that KCRC House is not being knocked down, but somehow manages to create the impression that Route 9 is a small country lane, and that the housing development next door is some sort of park.

It also highlights the fact that this is a very strange site.  On one side we have Route 9, on another side we have the MTR East Rail, and it is built around both Jubilee Garden estate (at one end) and KCRC House (at the other end).  The clubhouse is therefore being built on top of the railway line on a narrow strip of land above the railway and between the highway and the Jubilee Garden estate.

Another feature advertised is the "Sha Tin to Central link".  This is weird, because you would think that a development that is part-owned by the MTR would get this right, but the current plan is that the so-called "Sha Tin to Central link" will become an extension of the Ma On Shan line from Tai Wai to Hung Hom, and that East Rail will be extended from Hung Hom to Central.  Although this is many years away, it ought to be a selling point for The Palazzo - if they could get it right.  But, hey, why bother with something that is true when you have so much that isn't?

The stadium is Newlands Rugby Stadium in South Africa