The Palazzo is a new development in the New Territories.  As is apparently compulsory these days it has a funny foreign name (French and Italian being favourites) and an auspicious Chinese name (御龍山 - which is something to do with an imperial dragon that lives in the mountain).  It's built on top of the KCR East Rail line opposite Fo Tan station.  On one side it has views of the Fo Tan Industrial Area (and the mountain behind), and the other side there is the Hong Kong Sports Institute and City One Sha Tin (and yes, OK, some mountains behind). 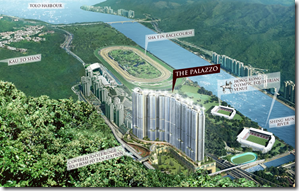 On the right you should see the image the developers want to portray of this rural idyll, with a few landmarks highlighted: the racecourse, Kau To Shan, Tolo Harbour, and the place where horses will jump over some fences in August (which will surely have been demolished long before anyone moves in), and the Shing Mun river.  Very green, isn't it?

Of course, when I say image, what I mean is an artist's impression...of how the developer wished it looked, rather than the reality.

Where to start?  Well, I think we can discount the blue sparkling water in the Shing Mun river and the nullah because no-one would believe that, though I suppose we should be grateful that we have been spared the yachts and junks that so often appear in the water in these type of pictures.

Anyway, my eye was drawn first to the rather large clump of bushes that appear in the foreground.  As luck would have it, they obscure the Fo Tan Industrial Area and the railway line.  If only the artist had moved a few metres to his left or right he could have made his portrayal far more accurate, but unfortunately the imaginary bushes were in the way. 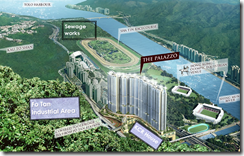 In the foreground, KCR House (as it probably isn't called anymore) has also been overlooked by the artist.  The main building has simply disappeared (it should be immediately to the south of The Palazzo) and the smaller building next to it has turned into another piece of open space with bushes and trees.

That's three landmarks gone missing.   In case you're getting confused, I've annotated the fantasy picture with a guide to what has been obscured by excessive imaginary green stuff (see right). 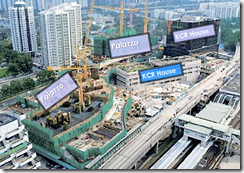 The picture on the left shows the The Palazzo being built, and you can clearly see that it fits around KCR House, which is the black building at the back right and the low white building next to it (if you're confused by the orientation, this is looking south whereas the main one is looking north).  Yet you won't find it in the official artist's impression.  The photograph also shows what looks like City One Shatin, which unluckily enough doesn't quite fit into the artist's impression, being just off to the bottom right.

Oh, and it seems that Ma On Shan had disappeared off into the far distance.  Not nearly green enough, I fear.

Still, there's always the view of the racecourse.  That's gotta be good, right?  From another artist's impression (see right) which I found on their splendid website, it appears that you can see the whole racecourse from your living room (love the decor, by the way).  Excellent.

Perspective can be a tricky thing, but if the racecourse is just visible beyond the tops of the apartment blocks (in the main picture), I think that means that it must be at least 700-800 metres from the nearest apartments.  And, if we are going to be picky, there are also the Jockey Club staff quarters blocking the views from the lower floors (which is what this view seems to show).

The other thing that amused me (though I doubt that will influence anyone one way or the other) is that the temporary venue for the Olympics horsey bits is shown as if it were a small football stadium.  It's not, though, is it?  Imagination is a wonderful thing, and it would be very boring just to show the dull reality of a temporary stadium.  But it isn't a League Two football ground, guys.

The website is full of all sorts of other nonsense.  It's worth a look, and although it is wildly pretentious it does also seem fairly well-designed.

I was going to do a post on this very issue until I saw your significantly better effort. I go past (under) this wall everyday and have been more than slightly bemused by the blatantly misleading advertising. Whilst the lies might be bemusing, it's the sheer pretentiousness that really gets my goat. Nessum Dorma - come on!

Not only have they removed the stands - and Shatin racecourse didn't get where it is today by not having a 85,000 capacity - but they've got rid of the shoot for the 1,800 metre start. Mind you, there are no stables for the horses, so maybe that's being a bit picky.

Perhaps I'm too hung up on the sheer awfulness of the Palazzo's advertising, but I keep heading back to the website for more. I've just noticed that they claim Kowloon Tong is 10 minutes away by car and that TST is 12 minutes away. That must be some fast driving, especially to TST!!

As pointed out by someone on the HKExpats discussion board , they are indeed rugby posts in the so-called equestrian arena.

the tv ad quite simply takes top prize for the most overbloated piece of you-know-what. and it's screening all the time in all east rail line trains... it does everything possible to irritate us sleep-deprived hongkies from otherwise catching up on our precious little slumber. help!!! ><

haha! Thanks for posting the truth in the right light!

Gee, man, why don't you give it a rest? All you ever do on this pathetic blog is whinge and whine - just like a little girl who has lost her favourite teddy bear. If you don't like HK then why don't you piss off and leave the place to us real men? Yes, piss off and crawl back under the stone from which you once unfortunately emerged.

I think you may have missed the point, my dear chap.

I find this advertising highly amusing. I doubt that anyone is fooled by this stuff, but surely you would agree that it's hilarious that they should plant a rugby stadium in the picture and think they would get away with it.

I am sure that you are telling it as is from your point of view, but may I ask if you have done a site inspection i.e. a tour in person posting as a prospect? My mom, who is in her late 70s, recently plunked down U.S. 1.5 m for one of these units. By the way, she said that she can see the race track from her unit without binoculars. This is from a resident's first hand account. She used to live across the river and she seems plenty happy about her upcoming move. Yours truly.