Soup of the day 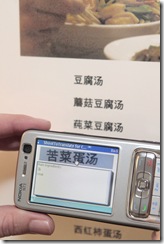 New Scientist reports that Nokia are going to launch a new phone which will be able to translate menus from Chinese to English.

IF YOU think you are ordering ice cream from a foreign menu, you don't want to end up asking for a plate of sheep's eyes by mistake. A cameraphone Nokia plans to launch next year will set you straight.

Snap a picture of, say, a dessert menu and the phone will recognise the characters and translate the words within a few seconds . The prototype shown to New Scientist can translate 9000 Chinese and 600 Japanese food-related words into English, with more language versions to follow.

However, if you closely at the photograph you can see that it may not be all that helpful - the English translation manages only one word - soup (湯).

Posted at 08:38 AM in Chinese language, Technology | Permalink | Comments (1)

http://babelfish.altavista.com/ is programmed into my Nokia.

Here follows its translation of the Japnese version of your quote, into Engrish:

If you think, the ice cream from the foreign menu, making a mistake in the edition of the eye of the sheep, we would like to finish the fact that you ask it has ordered. You put in place the plan of Nokia of cameraphone which next year it should launch straightly. If you stop the image of the dessert menu, the telephone verifies quality, translates the word within several seconds. The prototype where is shown in the new scientist rather than should continue, the Chinese of 9000 and Japan of 600 food can translate the word which is related, in many language editions and English