I can't help smiling at this story.

Firstly, that Wigan should want Steve Bruce as their manager, after his earlier stint lasted 7 weeks, and secondly that the deal should be held up because of a dispute about, er, image rights. 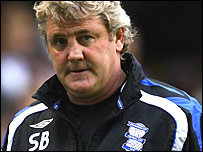 Steve Bruce is being prevented from becoming the new Wigan manager by a financial dispute between himself and former club Birmingham.

On Wednesday, Wigan had to postpone plans to unveil Bruce, who has left his post at Birmingham, as their new boss.

The delay has been caused by a dispute over £225,000 that Birmingham say they are owed by Bruce over image rights.

It's a feature of England qualifying campaigns.  There will always be a stage where England appear to have blown it, followed by a reprieve caused (at least in part) by another team.

This time it did appear that England would dig themselves out of the hole all by themselves, with a string of 3-0 victories (notably at home to Israel and Russia), but five minutes in Moscow put an end to that little plan.  I was rather surprised to hear the commentator say that Russia's 2nd goal would mean that England wouldn't qualify, and indeed it was based on the assumption that Russia would go on to beat Israel.  Hardly a foregone conclusion, as the two sides had drawn in Moscow, and Israel had held England to a 0-0 draw at home (and Russia had lost 3-0 to England away, and drawn 0-0 with Croatia prior to that).  However, it makes a better story to assume the worst, and most English newspapers have spent the last few weeks speculating about whether Steve McLaren would be sacked when England failed to qualify.

Then Israel beat Russia 2-1 on Saturday night, and England are back in with a real chance of qualifying.

The commentary on the game on Cable TV was amusingly Anglocentric.  When Israeli players made errors, they were chided for letting England down (in a way that no English commentator would ever do to an England player).  When Israel scored their injury-time winner, the commentator breathlessly informed us that England would now only need a draw against Croatia - as if that was the only thing that mattered.  Yes, maybe in Hong Kong that was the main concern, but this game will have been watched elsewhere in the world, probably by some people who either don't care whether England qualify - or even hope that they don't.

Now the pessimism will be replaced with mindless optimism.  Surely England can get a draw against Croatia at Wembley?  I guess the people at ESPN/Star Sports will be hoping they do.

I just noticed that the very first post here was exactly 4 years ago.  There are still a few other of my contemporaries hanging on, but only just.  I know how they feel!

There are probably dozens of splendid blogs out there, but these days I don't seem to have the enthusiasm to look for them (even when they should be hard to ignore because they link to me and post comments here).  Poor show.

Which is a long way of saying that I should really have given Ulaca a plug before now, but I didn't quite get round to it.

Somewhat in the Hemlock style, with a bit of Fumier thrown in.

When I was first in Hong Kong, I remember looking out of my hotel window one evening and thinking to myself that I needed to wear a jacket when I went out.  Well, I felt a bit cold, and it seemed logical that it would be cool in the evening.  Somehow my brain hadn't registered that the reason I felt cold was that the chambermaids always turn the temperature down to the minimum when they clean the room.  Of course it was actually hot and humid outside, as I soon discovered.

Even now, I sometimes get confused when I am walking towards the door and it gets cooler, so my brain concludes that it must be cool outside.  Reasonable enough, you might think, what with it being November and all that.  Except that actually the aircon has been turned down to "freezing" and outside is quite pleasant.

We shouldn't really need aircon in this weather.  Yet you will find it in virtually all offices, shops, restaurants, cars, taxis, buses, etc.  Unfortunately most buildings are not designed with adequate ventilation, and the only way to get fresh air is to switch on the aircon.

Open some windows, why don't you?

Things have changed somwhat in the world of televised football in the last 20 years:

Peter Robinson, the former Liverpool chief executive, remembers the start of the 1985-86 season, when football was not televised at all. 'There was no deal in place. It only came back on at New Year and the value of the contract when it was signed was about £600,000, which covered all four divisions.' He remembers that negotiators on both sides of the table had reservations about the value of live televised football. 'The broadcasters would play down the value,' he says. 'They'd say things like, "It's a long time for people to be sitting down," claiming that most TV programmes were no more than 45 minutes.

The idea of selling something lasting an hour and three quarters was difficult. They genuinely didn't know how popular it was going to be.' Years earlier, Robinson recalls being asked over to his counterpart at Everton, who wanted to hatch a plan restricting the club's appearances on Match of the Day. 'They wanted to make a deal whereby no club was shown more than once a month because they thought they were being overexposed and they were worried other clubs would see what their tactics were.'

It seems incredible now that anyone could voice such concerns and fear that live televised football would kill off the game. Twenty years on, the latest three-year rights deal with Sky Sports and Setanta is worth £1.7billion and Sky, whose sporting empire now encompasses rugby, cricket and even darts, showed more than 36,000 hours of live sport last year.

Back around 1985 there certainly were doubts on both sides - the clubs thought that too much football on TV was bad for the game, and the TV companies were reluctant to pay as much as the clubs wanted.  Having Robert Maxwell on the negotiating team for the Football League can't have helped, either.  However, things did start to change quite quickly after that - the following year BBC & ITV paid £6.2 million (for two seasons), and then along came Rupert Murdoch and the Premier League.

It's not just the Premier League, because this week the BBC and Sky have agreed to pay £88m per season for rights to the Football League, Carling Cup and Johnstone's Paint Trophy.  Clearly that's a lot less than the Premier League deal (and slightly less than ITV Digital agreed to pay in 2001), but I don't think anyone could have imagined 20 or so years ago that broadcasters would pay even a fraction of that for rights to the 2nd, 3rd & 4th Divisions, the Milk Cup and the Freight Rover Trophy (as they then were).

Has the law been changed?  Is it OK for newspapers to tell us who committed a crime long before it even gets to court?  Are people no longer presumed to be innocent until they're proven guilty?   Yes, it's the SCMP:

Attacker, on bail for rape, stabs ex-lover 7 or 8 times

A woman was fighting for her life last night after a man, who police said was her former boyfriend and was on bail after being charged with rape, climbed into her 24th-floor flat in Lam Tin and stabbed her numerous times with a knife.

It is understood the victim and her former boyfriend, who lives in Sau Mau Ping, broke up early this year.

A police source said the attacker was on bail after being charged with rape last month.

Normally these stories are written with a modicum of care, so as to strongly imply who must have been responsible, without actually spelling it out.

The Standard, for example, had this take on the story:

Police are hunting for a Hong Kong "Spider-Man" in connection with a brutal attack on a young woman.

Police said the wanted man, aged 22 - a former boyfriend of the victim - was wanted in connection with a sex offense and had jumped bail while awaiting trial.

He is being sought "in connection with" the crime.  That's not quite the same as saying that he did it.  Three times.

I see that the government is auctioning off more 'vanity plates'.

Is there any better way of saying "I am a plonker" than paying good money to have your own personalized number plate?  Not that I'm complaining - as a taxpayer, I have to approve, and as a bonus it always gives me a laugh when I see one of these idiots driving around.

As luck would have it, I saw two of these just last weekend, one of which was 'DINOSAUR'.  Er, right.

You really couldn't make it up.

It seems that Leicester fans may have been celebrating prematurely when Gary Megson left:

Leicester have interviewed Joe Royle, Peter Reid and Graeme Souness for the manager's job and the appointment could be made by Saturday.

BBC Sport understands chairman Milan Mandaric is keen to put the new man in charge before this weekend's visit to Preston to resurrect their season.

None of the three candidates to take over are currently in managerial positions.

Royle's last job was at Ipswich and ended in May 2006, while Souness' reign as Newcastle manager finished in February 2006 and Reid left Coventry in January 2005.

When I wondered why Peter Reid wasn't on the shortlist for the Ireland job, I was trying to be ironic.