It's hardly unknown for a government to have a giveaway budget just before an election.  Yesterday there were all sorts of tax cuts and rebates, and later this month we have the election for the Chief Executive.

Except that we already know who will win the election, and this "bonanza" ought to be the cause of some embarrassment to the government.

After all, it was only a few months ago that they were saying that we had a big problem with the budget deficit and needed a Goods & Services Tax (GST) to sort things out.  At that time they were predicting that this year's budget surplus would be only HK$5.5bn, and that in years when the economy was weaker there would be a deficit.

Yet here we are with a HK$55bn surplus, and forecasts that this will continue for the next few years.

The government will give most people back 50% of the salaries tax they have just paid, and there are also some fairly modest reductions in the rates of salaries tax that will mainly benefit the "middle classes".  Those on the very highest incomes will benefit the least, because the "standard rate" of 16% remains unchanged.

If the latest forecasts are correct, we can surely expect further cuts in salaries tax, and I do hope this is the last we hear about GST.

"Given the fact that government revenue and expenditure total about $520 billion a year, involving more than 200 revenue items and a large number of expenditure items ... it is understandable that some variances between the estimates and the actual figures will occur as a result of different factors."
Henry Tang Ying-yen, Budget speech

Some variances? So that's what he calls it when he starts the year by forecasting a fiscal surplus of HK$5.5 billion and ends it with HK$55 billion. This isn't variance from a budget. This is a financial secretary out of touch with his budget. 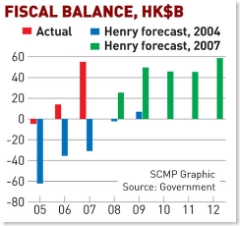 He is not the only one. Five years ago a committee of bureaucrats concluded that "even when the economy returns to `normal' growth, the budget deficits will remain and indeed worsen". In that spirit of getting it wrong, the chart shows you what Henry forecast for fiscal balance in his first budget three years ago, what he actually got and what he forecasts now. You may say, of course, that the reason these earlier forecasts were far too pessimistic was that no one could have known how strongly the economy would grow.

I am not so sure. Anyone who really wants to know how this economy rebounds and what this can do to our fiscal position has plenty of past instances for reference. What is required is faith that Hong Kong can still do it. The knowledge that it always has done it is readily available. The faith, need I say, is sometimes lacking.

OK, time to get to the point of all this. It is that the budget has spun out of Henry's control, that he is running much greater surpluses than he ever expected to run, than we need to run or than are good for Hong Kong's economy.

All that he can think of to remedy this, however, is a series of one-off expenditures and rebates when what he really needs is a sweeping rethink of revenue measures, as in cutting them, not adding to them.

Isn't it ludicrous that only a few months ago he was still talking about imposing a goods and services tax on us?

I can't find exact figures, but I think only around 20% of taxpayers pay more than HK$30,000 tax per annum. It may even be less than that.

"Those on the very highest incomes will benefit the least"

Actually, aren't those on the lowest income, who pay no tax, the ones who benefit the least?

Brom, they benefit because the tax on wine and beer has dropped. Not that they drink much wine, but my uncle in public housing will sink a few beers every now and then, so he'll benefit, despite never paying tax.

The rich will benefit from this too, of course, but they have higher disposable income, so the utility of the saved money will be less for them, as an economist might say. And of course, their total taxes will remain mostly unchanged as they're probably paying at the flat rate anyway.

Shaky, those who are on high-paying salaried jobs are the big losers when it comes to tax, because they can't get away with much beyond the standard deductions. Those of us who are self employed have to deduct for travel expenses to and from work, a per diem allowance for lunch and necessary business expenses (pens, paper, electricity, internet, laptops, sixteen pints of lager in Carnegies, etc. You know, the essentials.)

You might be surprised how many Chinese professionals are employed as contractors (or a company) so that they reduce their tax liability.

Well, yes, those who don't pay salaries tax will not benefit from cuts in salaries tax. Perhaps I could have worded that better.

The point I was trying to make was that although the most recent increases in the marginal tax rates have been reversed, the increases in standard rate have not. The main beneficiaries are those on middle incomes, not those at the top or the bottom.