No surprise there, then.  The ESF has announced that they have made some fairly minor adjustments to the new salary packages for teachers to take effect next September.

"These changes have been made in response to the cogent, well developed and evidenced arguments put to us by individual teachers, school councils and parents," she said.

Note the rather pointed mention of individual teachers.  The nonsense spouted by the Association of Professional Teachers of ESF Schools, and its chairman Julian Harniess, may possibly not have been quite so "cogent, well developed or evidenced" (evidenced? is that a word).  In fact, one might almost say that it was unhelpful.  Oh, I did already, and he did.

What should I buy?

Yesterday's SCMP had a brief review of the latest Apple iMac G5.  Given that it has a 20" screen and can burn DVDs, I was assuming that it would also function as a PVR, but clearly it doesn't.  This seems rather puzzling, though I suppose the obvious answer is that you can download stuff (illegally) rather than recording from TV.

My question therefore is whether it makes any sense to buy the iMac and some sort of add-on box (like this) that will handle TV signals, or to go for a PC with the Windows Media Centre, or just use an ordinary DVD/HDD recorder.  Or maybe wait to Apple to add PVR functions to the iMac?

Fumier can be quite amusing, but when he ventures on to more serious subjects I usually disagree with him (very politely, of course), but I have to agree with him that ESF teachers are doing themselves no favours by letting Julian Harniess represent them in trying to stop the ESF from cutting their salaries.

There is an advert in today's SCMP placed by the Association of Professional Teachers of ESF Schools (of which Mr Harniess is the chairman), arguing that ESF teachers receive "an average monthly salary of HK$39,024" and "offer real value for money". However the figure they quote appears to be seriously misleading - firstly because they quote the median rather than the average, and secondly because they exclude the benefits that most ESF teachers get:

She said the average pay for teachers was $47,800, with 78 per cent on the top level of the basic pay scale earning $51,911 a month. This did not include incentive allowances to 68 per cent of teachers for extra responsibilities, 25 per cent gratuity, and other benefits such as housing and education.

A couple of weeks ago the SCMP education section, published pieces written by Julian Harniess and Heather Du Quesnay putting the arguments for and against the proposed pay cut. I can't find the articles on the SCMP's horrible website, but the title of Mr Harniess's piece will give you a flavour: "Management ideals just tales by an idiot". All stirring stuff, and maybe his members were happy to see their case put so forcibly, but he seems to have rather missed the point.

The ESF is funded by taxpayers and parents. Given the choice, taxpayers would almost certainly stop the subvention (paid annually by the government for each child in ESF schools), and whilst parents appreciate the work done by ESF teachers they don't see why teachers should be paid excessive salaries. Morevover, the ESF has to demonstrate that it is acting responsibly if it is to preserve the subvention, and reviewing salaries is one way of doing that.  Teachers may not like it (understandably so), but they are unlikely to win the argument unless they can put forward a logical case.  Using accurate and correct figures.

The government has said that it has no plans to foce mobile phone operators to extend their coverage throughout country parks.  Predictably enough, politicians have been making a fuss about this.

Ten years ago, most people didn't have mobile phones, calls were expensive and coverage was patchy.  That has all changed, and now we expect people to be contactable 24/7 - even if they are on the MTR, in a tunnel, overseas, or even on a plane.  You can pay extra so that if you are up to no good in Macau or in China your wife hears a Hong Kong ringing tone and is none the wiser (maybe).  You can even read your email in a taxi or sitting on the beach.

Except that there are a few places where you really can escape from phone coverage.  Apparently there are about 40 "blind spots" in Hong Kong county parks where mobile phones don't work.  Oh dear.  As recently as five years ago, I don't think anyone would even have expected to be able to use their mobile phone in a remote location, and people managed to cope with this inconvenience.

Yet now it seems that some people regard it as a terrible thing.  From the SCMP (do I still have to mention that you need a subscription to read this?):

Legislator Li Kwok-ying, of the Democratic Alliance for the Betterment and Progress of Hong Kong, said he was disappointed. In recent research the DAB identified more than 40 blind spots in popular hiking areas including Sai Kung and Lantau Island and the northern New Territories.

"I feel sad the government refuses to pressure mobile phone operators to improve their service," Mr Li said. "It is putting business before the safety of people."

How much does a walkie-talkie cost?  Not much.  Or if want to go upmarket, I understand that the companies that provide satellite phones are always looking for more business.  Pricey maybe, but you should always put safety before financial considerations, right?

Last week's Sunday Morning Post had an exceptionally silly news story claiming it was no longer fashionable for local Chinese women to have Gweilo boyfriends, accompanied by all manner of tosh about the difficulty of cross-cultural relationships.

They quoted from a newspaper column written by Chip Tsao, who had plenty of rude things to say about Gweilos:

"The ones who stayed behind were left to fend for themselves. They had no choice but to move to dorms on Lamma Island or to rent stone houses that people in Sai Kung use to house pigs," his column said.

The full article is at Madame Chiang, and reaction can be found at Hongkie Town, Simon World, BWG and elsewhere.

It appears that the SCMP got plenty of letters from readers complaining that this was racist nonsense, so this week they followed up on the story.  Entertainingly, the columnist is defending himself by saying that he was being ironic:

Tsao hit back at the criticisms by saying: "I am deeply disappointed that western readers, especially those from the United States and the United Kingdom, could not read between the lines and find the sarcasm in my statements. I have always been provocative."  He said he was simply writing something "juicy" to reflect a common theme that already existed in the Chinese-language media.

"If these people saw what Apple Daily and the rest of the Chinese-language papers write, they would not have been so shocked by my column. Hong Kong papers nowadays are always talking about how these foreigners are old and penniless. I find their comments racist.

This doesn't reflect very well on the SCMP.  The readers who were offended would presumably be those who don't read the local (Chinese press), and so are not familiar with Mr Tsao's work - which would be almost all of them (including myself, of course).  Hence the job of the SCMP is to provide some background and give readers a clue whether Tsao really was being ironic.

Clearly if I read a comment such as Tsao's one about dorms and pigs in Hemlock's Diary, I would know that it was intended as irony, whereas a casual reader might well take it seriously (much to Hemlock's delight, I would imagine).  If a newspaper quoted Hemlock's comments as if they were a serious commentary on life in Hong Kong, I would instantly know that the journalist had missed the point, and I would stop reading (unless I was desperate for material to use here).  Which is pretty much what I did with that article in last Sunday's paper, but mainly because the other source was a dating agency who claimed that Chinese women no longer wanted to meet Westerners.

Whatever it was, it certainly wasn't a news story.

Excuse of the week

The front page of the SCMP over the weekend trumpeted the growth in circulation of both the daily and Sunday editions (up a whopping 4% over the same period last year).

All so much blah blah, but what caught my eye were the excuses they offered for the earlier fall in circulation:

Yes, that'll be 9/11, the dotcom collapse and SARS (I'm surprised they missed out other key factors such as the Asia financial crisis and Harbour Fest, but I guess they didn't want to seem like a bunch of losers who would blame anyone but themselves).

So it was nothing to do with the SCMP being rubbish, then?

IceHeat is a new discussion forum from someone who says they are bored waiting for IceRed to return.

Thinking of buying an iPod Nano? How about one with 200gb of storage? 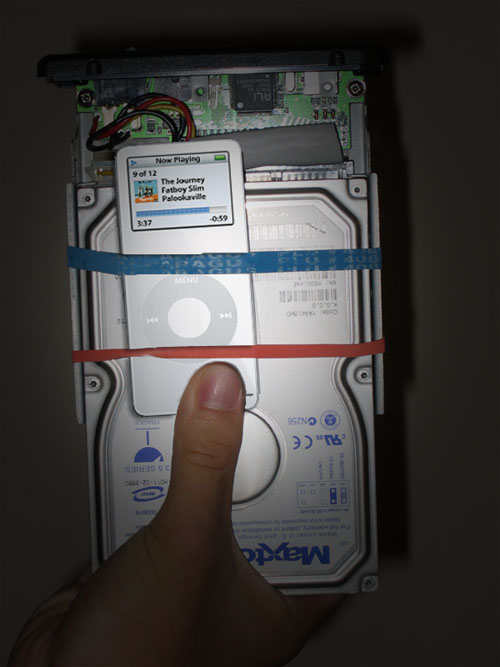 There was an interesting article in Business Week last week about PCCW and its Now Broadband TV service (sorry - I was waiting until it became freely available, but it seems that it doesn't work that way and you may not be able to read it unless you are a subscriber).  The piece points out that PCCW are leading the world:

PCCW accounts for some 30% of all IPTV subscribers worldwide. "PCCW is definitely at the forefront" in the world in IPTV, says analyst Michelle Abraham of Scottsdale, Ariz., consultancy In-Stat.

There's also an interesting explanation as to why PCCW have been able to sign up deals with content providers such as HBO:

PCCW has also proved more adept than i-Cable at preventing piracy in Hong Kong, where some 100,000 receive illegal cable service. A pirate can get all cable channels with access to a set-top box and the encryption. But because IPTV delivers only the channel being watched at the time, theft is harder and less efficient. This has helped PCCW win over content providers. Until recently, "people have been very nervous" about IPTV, says HBO Asia CEO Jonathan Spink. "But we were very impressed with the security of this system. [PCCW executives] know exactly where the signals are going." Adds Star Group Ltd. spokesman Benson Chao: "IPTV is pretty hard to crack."

According to today's papers, PCCW is planning to add HDTV and video on demand to Now Broadband TV before the end of the year.  No word of how the video on demand part will work, but it looks as if the programs will be stored on their servers rather than in the customer's box (as per Sky+) and the implication is that they will be charging for this service on a usage basis.  Meanwhile, dear old BT will finally get round to launching its IPTV service next summer.  No need to rush, guys..

A couple of years ago, companies such as BT in the UK and PCCW in Hong Kong were regarded as dinosaurs who would inevitably lose out to more agile competitors.  However, they are fighting back, and perhaps we shouldn't write them off just yet.