Anyone living in Hong Kong will be aware that the elections for the Legislative Council take place tomorrow (Sunday). I don't have a vote this time, so I have four more years to make up my mind who to support in the next elections. In truth, I'm not sure I'll have much more of a clue then than I do now. Which is distinctly odd for someone who always took a keen interest in British politics and wasn't in much doubt who to vote for.

So what's the problem (for me) in Hong Kong? Firstly, I suppose, that politics is dominated by one issue, and secondly that we are electing an opposition, not a government. Voting "for democracy" sends a signal to Beijing, but it's not as if they are unaware of what most people in Hong Kong want, and the behaviour of many of the pro-democracy politicians hardly inspires confidence (if we assume for a moment that we are choosing people to run the place). Voting for the "Beijing" parties (such as the DAB) is even less attractive. The Liberals are the obvious alternative, but their leader seems a bit clueless and I am puzzled by the concept that what's best for Hong Kong business is always to do what Beijing wants, and that CEPA is the solution to all HK's problems.

The very fact that we are not choosing the government is probably the reason why we have politicans who go in for posturing and grand gestures rather than trying to formulate logical policies. The optimists say that the political parties have made good progress in a relatively short time, and expect that real democracy will bring with it a change in local politics. One has to hope so. 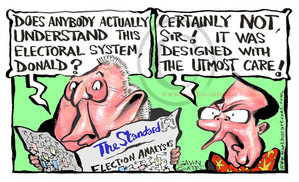 A reader asks whether Hong Kong's voting system was cunningly designed in order to frustrate democracy. I think so, but it was the Brits who did it first!

Democracy was only introduced to Hong Kong around 20 years ago, and initially only in a very limited form. In the first iteration it was simply a way to choose the 'great and the good' to serve on the Legislative Council, from amongst the various professions (doctors, lawyers, bankers, etc.). Then a few years later they introduced geographical constituencies, but used a 'Double-seat, double-vote' system to try to prevent the pro-democracy groups dominating the legislature (it didn't work - they won 17 out of 18 seats).

When Chris Patten became governor, he greatly increased the number of electors in the functional constituencies (to virtually the whole working population), introduced an 'election committee' for directly-elected District Board members to choose members to serve on LegCo, and switched to a single-member constituency system for the geographical seats. Clearly this was much more democratic, but it was also a very temporary arrangement.

The main changes made after the handover were to create five large multi-member constituencies, and to roll back Patten's changes to the functional constituencies so that they once again became 'rotten boroughs'. The 'election committee' was chosen by Beijing rather than being made up of District Council members (though this element has now been phased out).

So the colonial government was reluctant to allow real democracy and designed the voting system accordingly. After the handover, the Chinese government effectively did the same thing, and was able to use similar mechanisms and treat Patten's reforms as an aberration. The system designed by the British and now adopted by Beijing is clearly designed to prevent one single party gaining control (somewhat ironic, all things considered, but there you go).