I remember about five (?) years ago when both the English language terrestrial channels had basically the same schedule, anchored around a second-rate film at 9.30.  Then ATV World changed to a lineup that was based around documentaries, though they subsequently added more drama and a lot of sport (mainly horse racing).  Gradually, TVB Pearl has added more documentaries and drama and also cut back on the films.  So now the two channels once again have similar schedules!

Pearl insist on creating themes for the programs they buy, including the so-called "MI 9-30" slot (they don't seem to care that actually the programmes are transmitted at 9.35 or 9.40 rather than 9.30).  I have to give them credit for showing some interesting documentaries in this slot, usually from the BBC or Discovery Channel.

This week they showed a BBC 'Horizon' documentary about the Atkins Diet that was first aired in the UK in January.  The programme got significant coverage at the time (here for example, registration required) because the diet has been regarded as something of a mystery scientifically.  How could people eat more and still lose weight?

All you can eat (but no table)

Expat@Large has a bizarre tale of buffet-eating in Singapore (at least I think it's Singapore). I would certainly be upset if I left my table for a short while and came back to find a family of seven tourists sitting where I had been. Never happened to me, but if it did I think I'd be tempted to leave immediately, obviously without paying. After all, if they deny that it is your table then how can they give you the bill?

When I was first in Hong Kong (and living in a hotel), I used to go to the buffet once or twice a week, and eat vast mountains of food before staggering back to my room to lie down. That was in the days when I seemed to be able to eat as much as I liked without putting on much weight, which sadly no longer seems to be the case any more (hence my interest in the Atkins diet - not that I have yet started following it).

Buffets in upmarket Hong Kong hotels are quite something, and I don't think I'd ever had anything similar prior to coming here. The problem is that after a few weeks it's easy to get bored with them, because you eventually realize that actually the selection doesn't change that much from day to day. The ubiquitous luxury items such as smoked salmon and oysters are there every day without fail, as are the salad items and the soup, and some form of roast meat (usually beef), plus the vast array of cake-type things.

Do they still have fines in Singapore for people who take food from the buffet but don't eat it? Does that still apply if they have given your table to someone else whilst you were filling up your plate?

Now that the really hot weather is with us, one of the hazards of walking around on the street is catching sight of men wearing vests who have decided that they need to keep cool by exposing their stomachs. Needless to say, men who dress in this peculiar way tend to have large beer guts, which become all the more obvious when you see their vests folded up.

For goodness sake, get a grip. If you want to be cool, take off the vest and then you won't look like a complete idiot.

The Apprentice [not The Associate as I keep calling it] continues to be fascinating but slight bizarre television. The greatest weakness of the show is that condensing everything into a one hour each week is almost impossible, especially when they have a recap of the previous show at the start and feel the need to build up the tension by showing people walking in and out of the boardroom and going into the lift. So it's hard to judge how the teams have performed when there is little more than 20 minutes of screen time devoted to what happens on the tasks, and perhaps it should be no surprise that for three weeks in a row, events in the boardroom seemed to be more important than the team member's success or failure in their assigned tasks.

I was going to write a lot more about Tony Blackburn and Cliff Richard, but thankfully I decided not to bother. My theme was going to be the way that both of them have managed to be deeply unfashionable and yet very successful over the last 40 years or so. Craig Brown in the Daily Telegraph (registration required) has done a much better job, and has also unearthed the intriguing fact that the radio station that suspended Tony Blackburn is 80% owned by Noel Edmonds, another naff disc jockey (though better known as a naff TV presenter).

Cliff and Tony; Tony and Cliff. For nearly 50 years, the relationship between Tony Blackburn and Sir Cliff Richard has been that of fan to idol. Tony Blackburn was born in Guildford at 2am on January 29, 1943, making him three years Sir Cliff's junior.

Ever since, the two men have enjoyed strangely parallel careers, Cliff as a singer, Tony as a DJ. Neither was ever truly fashionable for more than a handful of years, Cliff between Move It in 1958 and The Young Ones in 1962, Tony between his stint on Radio Caroline in 1964 and becoming the first voice on Radio One in 1967. At that time, as "the most famous radio personality in the country", he was able to make a triumphant return to his public school, Millfield, with "accessories to match - an E-type Jag and a gorgeous bunny girl in the shortest mini-skirt ever invented".

But their fashionability was to prove short-lived. By the end of the 1960s, the two men were already by-words in naff.

I may have given the impression that I thought that HSBC's new automated queuing system was a good idea. I apologize for this - I was wrong.

I went to the bank today and picked up my ticket with its promise that I would probably have to wait 6 minutes. As they were currently serving ticket number 107 and I had number 109 I thought was probably a slightly high estimate. What I hadn't figured on was that the holder of ticket number 108 would be paying in 50 cheques into 50 different accounts and discussing the full range of services available from the bank.

You might think that the beauty of an automated queuing system is that it doesn't really matter if it takes a long time to serve one customer because you have the flexibility of allocating customers to any counter (rather than having 3 or 4 different physical queues each with allocated counters). However, it seems that HSBC's system is not that sophisticated, and so I really did have to wait for the woman with 50 cheques before I got served (some 25 minutes).

Or perhaps the system does have some flexibility but no-one was monitoring it, because while I was being served I was amazed to see that they called the holder of ticket number 110 to another counter.

Whatever it was that went wrong, no-one apologized for the problem. If they'd had a single queue I might have had to wait 20 minutes, and making me wait longer than that was very poor customer service.

Another strange tale from the socialist republic of Singapore, where chewing gum is now available but thinking for yourself is still considered a bit risky.

Eyal applied for a temporary visa to allow him to stay in Singapore whilst he looks for a job, and was told that they couldn't accept his application because he needed to supply proof of his bachelor degree - and he had sent them a copy of his masters degree.

It's started already. Shaky has one picture caption making fun of David Beckham, and someone has just seen me a few others, including this one. 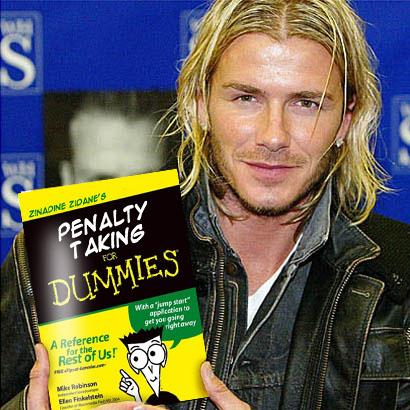 That's what you call nerve-wracking, not to mention desparately disappointing.

It was an absorbing game. In the first half I thought England looked reasonably comfortable defending their slender lead, but as the game went on it looked increasingly likely that Portugal would score, and after they did I really doubted England's ability to get back into the game. I said after the Croatia game that England would do well if the midfield carried on playing with the same level of determination, but sadly that wasn't the case against Portugal. Beckham was poor again, and Scholes didn't have a good game either. Pumping long balls up to Owen and Vassell was not a good strategy, though if Rooney had stayed on things might have been different.

And yet... After Portugal went ahead in extra-time England did come back into the game, and Lampard deserved his goal. Before that, England were unlucky to have Campbell's goal at the end of normal time disallowed. Referees usually protect goalkeepers, so it wasn't a big surprise, but it looked like another poor decision by Urs Meier, who didn't have a good game at all.

The less said about the penalties the better.

However, although England can curse their bad luck in losing Rooney early on and having a goal disallowed, the truth is that if the midfield had done its part it wouldn't have mattered. On balance, Portugal probably deserved the win.

Most people in Hong Kong don't drink tap water (or at least not without filtering and/or boiling it first). Offices very often don't have their own water supply (hence the slightly bizarre sight of people washing cups in the washroom), so the only option is distilled water, distributed around Hong Kong in large lorries.

Although the water itself is doubtless very pure, the containers in which it is distributed can get very dirty whilst they transported around Hong Kong and left on the street prior to delivery to the office building (because the lorries cannot park for long enough). If you don't clean the top of the container before putting it in the dispenser there is every change that the dust and dirt will get in with the water.

Then there's the fact that most dispensers offer a choice of ice cold and boiling hot water. If you want your water at room temperature you end up mixing the hot and cold together, which is a ridiculous waste of energy.

I have an idea - what if we had pipes to distribute clean and pure water to every office in Hong Kong? No, it would never work...